END_OF_DOCUMENT_TOKEN_TO_BE_REPLACED

GOLD PRICES held little changed on Monday after New York's largest gold ETFs recorded their first monthly outflow in 5 amid growing expectations that the European Central Bank will join the US Federal Reserve in tightening its monetary policy to try pulling consumer-price inflation back from 4-decade highs, writes Atsuko Whitehouse at BullionVault.
Longer-term interest rates rose Monday in the bond market while Western stock markets rebounded from Friday's sharp fall following stronger-than-forecast US jobs data for May.
Spot gold prices in the US Dollar today edged up to $1853 per ounce after dropping 1% after Friday's jobs data.
Gold priced in the Euro meantime edged lower by 0.2% to €1724 ahead of the ECB's policy meeting on Thursday.
Gold-backed ETF trust funds shrunk last week, as both the SPDR Gold Trust (NYSEArca: GLD) and the iShares gold product (NYSEArca: IAU) saw net investor outflows.
Wednesday's close to May had already seen the GLD and IAU also record their first monthly net liquidation since December, shrinking by 2.4% and 0.4% respectively as gold prices fell 4.4% on a monthly average basis. 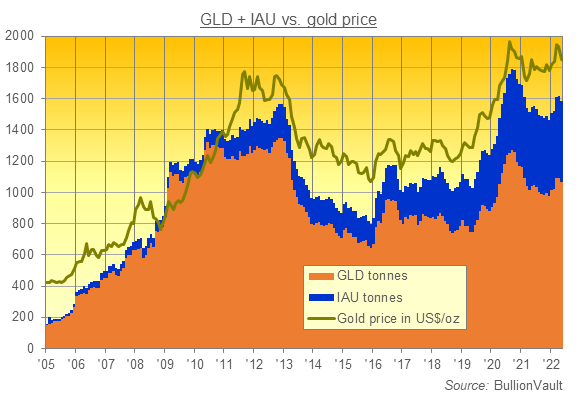 "I believe that inflationary caution is supporting gold's lower prices," says Bruce Ikemizu, chief director of the Japan Bullion Market Association, forecasting that headline inflation rates will not subside so long as energy prices continue to rise.
"As a result, the tug-of-war between inflation and the Fed's move to raise interest rates to counter it, plus the possibility of a subsequent recession, will likely keep gold between $1800 and $1900...for some time yet."
Crude oil has risen by nearly 60% so far in 2022, and oil prices hit $120 a barrel on Monday – a 3-month high – after Saudi Arabia raised its sales price to Asian buyers for July.
The CME exchange's FedWatch tool now says that more 2-in-3 bets on US interest rates foresee 3 half-a-point hikes by September, up from 2-in-5 such bets a week ago.
"[For] the September meeting, if I don't see compelling evidence [that inflation is cooling], I could easily be at 50 basis points in that meeting as well," Cleveland Federal Reserve President Loretta Mester said Friday.
On the same day, the US Bureau of Labour Statistics reported that non-farm US payrolls expanded by 390,000 in May, above the 328,000 consensus forecast from analysts, with average hourly earnings slightly weaker than expected but still up 5.2% from a year before.
The US consumer price index for May is due for release on Friday and is forecast to edge lower to 8.2% from 8.3% in April.
The Eurozone's annual rate of inflation – published last week – accelerated in May to its highest level in the 19-nation currency union's 2-decade history at 8.1%, with Germany's consumer prices rising the fastest in 4 decades.
"Normalisation [of monetary policy] has a natural focus on moving in units of 25 basis points," says Philip Lane, chief economist at the ECB, which is set to announce an end to bond purchases this week's policy meeting.
"So increases of 25 basis points in the July and September meetings are a benchmark pace."
Despite the widening interest rate gap over the Euro, the Dollar Index – a measure of the US currency's value versus its major peers – retreated 0.25% Monday morning, failing to extend Friday's recovery.
Ten-year US Treasury yields – a benchmark rate for government as well as many finance and commercial borrowing cost – advanced 5 basis points to 2.98%, a 2-week high.
In contrast, inflation-protected TIPS yields eased back Monday, retreating to 0.20% per annum as the breakeven rate – an implied rate of US inflation across the next decade – rose to its highest in a month at 2.75%.
The UK gold price in Pounds per ounce today fell 0.6% to £1473 as Sterling gained against the US Dollar on the FX market despite today's sudden confidence vote on British Prime Minister Boris Johnson's leadership to be held this evening among his Conservative Party MPs.
Gold No.1 consumer nation China meantime eased Covid restrictions further as capital city Beijing re-opened restaurants for indoors dining and the financial center of Shanghai – which was locked down for 2 months – continued the slow and phased re-opening that began last week.
The price of silver, primarily an industrial metal, bounced 1.6% to $22.31 per ounce after slumping across May, pushing the Gold/Silver Ratio – which tracks the two formerly monetary metals' relative prices – down to just under 84, the lowest cost for gold in terms of its gray cousin in more than 2 weeks.
Platinum, which finds two-thirds of its demand from industrial uses, rose 1.2% to $1034, while palladium – which finds well over 4/5ths of its end-use demand from auto-catalysts to cut carbon emissions from gasoline engines – jumped 2.4% to $2023.