END_OF_DOCUMENT_TOKEN_TO_BE_REPLACED

GOLD PRICES traded unchanged on Wednesday in London, holding $30 above Monday's 17-week lows against the strong US Dollar – despite fresh outflows from the major gold investment ETFs – as Western stock markets and bond prices slipped yet again after Federal Reserve chief Jerome Powell vowed to keep hiking interest rates until inflation falls hard from today's 4-decade highs.
Having hiked the Fed Funds rate by half-a-point this month – the first such move in over 2 decades – "We will go until we feel we're at a place where we can say financial conditions are in an appropriate place, we see inflation coming down," the US central bank boss told the Wall Street Journal in an interview late Tuesday.
"We'll go to that point. There won't be any hesitation about that." 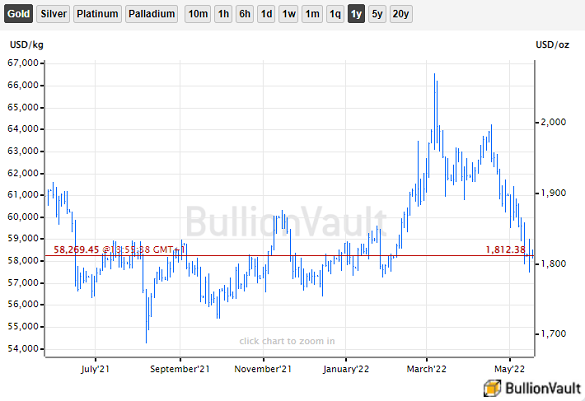 Rallying 4.1% by Tuesday night's close from last Thursday's 6-month on the MSCI World Index, European equities traded 0.4% lower this morning as New York futures pointed lower following Powell's comments.
US bond yields meantime rose back above 3% per annum on 10-year Treasuries as UK and German borrowing costs also rose back towards last week's multi-year highs following fresh multi-decade highs in official estimates of inflation.
The UK's cost of living rose 9.0% annually on the CPI index last month, the Office for National Statistics said, the fastest pace since March 1982, as the post-Covid return of VAT sales tax at 20% on dining out coincided with record-high gasoline prices at the pump
Eurostat meantime today confirmed inflation of 7.4% for the 19-nation Eurozone in April on the HCIP measure.
Headline consumer price inflation in the US held near 4-decade highs last month, slipping to 8.2% from March's 8.6% reading.
The Fed's half-point hike this month took its key interest rate to 1% per annum.
"It's a very, very difficult place to be," admitted Bank of England governor Andrew Bailey about his position to MPs on the Treasury Select Committee on Monday after raising UK rates to 1% earlier this month.
"To forecast 10% inflation and to say there isn't a lot we can do about it is an extremely difficult place to be...This is a bad situation to be in."
UK gold prices in Pounds per ounce today bounced £10 from a new 7-week low at £1450, while the Euro gold price also traded near its cheapest since end-March at €1720.
"Persistently high inflation, stretched equity market valuations, recent losses in equity markets for retail investors and still low deposit rates can make a case for gold as an alternative asset class," says analysis from Swiss bullion bank UBS's Securities India division, noting that for the metal's No.2 consumer nation, "a 1 percentage point increase in inflation leads to 2.6% rise in [Indian household] gold demand.
"[But] actual gold price growth has been significantly below what our forecasts' model predicts since the middle of 2021," says a paper from European gold ETF provider Wisdom Tree, "[because] gold has become less sensitive to inflation than we previously thought.
"In fact, we have recalibrated our model to incorporate the last few years of data to factor in this lower sensitivity."
Giant US-listed gold ETF the SPDR product (NYSEArca: GLD) yesterday saw net selling by shareholders for the 9th session running, shrinking by another 0.4% to reach its smallest size since the start of March.
World No.2 gold ETF the iShares product (NYSEArca: IAU) also shrank on investor selling, losing 0.1% of its shares in issue to reach its smallest size in almost 5 weeks.
With bond yields rising on Wednesday, betting on the Fed hiking its key interest rate by 0.75 points at next month's meeting has edged back in favor of another half-point rise.
But betting on the Fed Funds target rate ending 2022 at 3.00% or above – the highest such level since Bear Stearns collapsed in March 2008 – has jumped, reaching a better than 3-in-4 certainty according to the CME derivatives exchange's FedWatch tool.