END_OF_DOCUMENT_TOKEN_TO_BE_REPLACED

GOLD BARS traded in the global wholesale market slipped below $1700 per ounce for the 3rd time in a week in London trade Wednesday lunchtime, losing against a rising US Dollar but holding firm in price for the week so far in Euros and Sterling – and rising to new 2-month highs in Japanese Yen – as world stock markets fell yet again amid the worsening energy-price crisis.
"We will not supply gas, oil, coal, heating oil – we will not supply anything," said Russia's President Vladimir Putin this morning as the European Union pressed ahead with plans to impose a price cap on how much is paid for energy commodities from its eastern neighbor, already hit by financial sanctions over Moscow's latest invasion of would-be EU member Ukraine.
Global stock markets fell for the 9th session running on the MSCI World Index, the worst such run since December 2018.
Major government bond prices rallied, easing bond yields back from new multi-year highs.
"Gold is back in the danger zone as global bond yields are skyrocketing," Bloomberg quotes one spread-betting platform's analyst.
"Central banks seem like they will be aggressive with front loading rate hikes right now. It could get ugly quickly if gold breaks below the $1690 level as there isn't much support until $1650."
Betting on the US Fed making its 3rd consecutive hike of 0.75 points – the sharpest such move in 3 decades – at its September meeting 2 weeks today continued to strengthen, putting the odds at 84.0% after dipping to 69.0% this time last week.
On a monthly basis, the annual yield offered by 10-year TIPS – a measure of market expectations for real US bond yields after accounting for inflation – rose by 0.53 percentage points in August, matching April's rise to make the fastest jump for inflation-protected Treasury yields since the gold price crash of spring 2013. 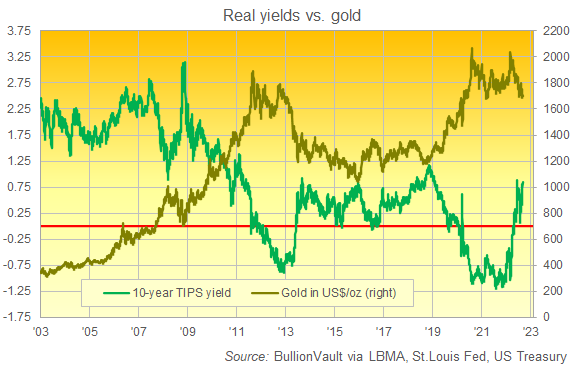 The world's 2 largest gold-backed ETF trusts both contracted on Tuesday, with the GLD shrinking by 0.2% and the smaller IAU liquidating 0.1% as shareholders were net sellers of those New York-listed instruments.
Wednesday's dip in global Dollar gold prices below $1700 saw premiums for bullion landed in China – the precious metal's No.1 consumer market – rise to the equivalent of $27 per ounce overnight, the highest since 2016 according to data compiled by the mining industry's World Gold Council.
Back with Europe's energy price-cap plan, "It is not a constructive proposal," said Jozef Sikela, industry minister of the Czech Republic – now holding the rotating EU presidency – as Brussels confirmed it wants to discuss the price cap at Friday's meeting of Eurogroup leaders.
"It is more another way to sanction Russia than an actual solution to the energy crisis in Europe."
With Russian inflows of gas down 89% from a year ago, the European Union – which previously got 2/5ths of its natural gas from Russia – is set to start banning imports of Russian oil and refined petroleum products entirely from early 2023.
Yet European gas prices slipped for a 2nd day running this lunchtime, edging back 7.5% from Monday's 1-week high for December TTF contracts and trading almost 1/3rd below late-August's record high.
Eurozone retail sales fell almost 1% in July from a year earlier, new data said earlier this week, while new orders at German factories sank 13.6% from the same month in 2021, the worst slump on record outside the global financial crisis of 2008 and the Covid shutdown of early 2020.
The 19-nation currency union then saw services-sector activity drop last month for the first time since March 2021 on the S&P PMI survey.
US services activity accelerated in contrast, with prices paid by purchasing managers holding firm on the ISM index but well down from April's record levels.
Thursday will see the European Central Bank announce its September monetary policy, widely expected to bring another rise in borrowing costs after the ECB ended 8 years of negative nominal interest rates with a half-point hike to 0% in July.
Inflation across the 350-million citizen monetary union last month hit a new series record of 9.1% per year, driven by soaring energy costs.
New UK prime minister Liz Truss will this afternoon explain her 'help to buy' plans for households and business facing soaring energy bills this winter, estimated to need at least £100 billion of government borrowing.
With the US Dollar rising to new 2-decade highs on its trade-weighted index today, the gold price for UK investors held unchanged at £1486 per ounce while Euro gold slipped a little to €1714 and Yen-priced gold rose above ¥7,900 per gram.