END_OF_DOCUMENT_TOKEN_TO_BE_REPLACED

GOLD PRICES traded sideways on Monday after a volatile week and a volatile year that's seen rising interest rates and the soaring US Dollar battle against bullion's strong attraction of a store of value amid inflation, war and geopolitical tensions, writes Atsuko Whitehouse at BullionVault.
Longer-term borrowing costs rose, back above 3.50% per annum on 10-year US Treasury bonds, after the Federal Reserve last week raised its key overnight rate to a ceiling of 4.5%.
That left the yield curve deeply inverted, widely accepted as a clear signal of economic recession ahead.
"If the long Dollar: long yield [trade] is starting to run out of validity, this would be a tailwind for gold, but in the shorter sentiment remains mixed," says Rhona O'Connell, head of market analysis at brokerage Stone X Group, pointing to continued liquidation from gold ETFs in 2022.
Spot gold prices held above $1790 per ounce on Monday, steadying after last week's swing of $50 followed softer-than-expected US inflation data but a "hawkish" rate hike from the Fed.
"[There's a] long-running tug of war between negative financial factors pulling down on gold prices and the metal's attraction as a store of value during inflationary and/or risky times," says Christopher Louney, commodity strategist at RBC.
With the Fed lifting overnight interest rates by more than four percentage points from New Year to last Wednesday's announcement, the US Dollar index – a measure of the US currency's value versus its major peers – has gained 8.9% from the end of 2021.
Priced in Dollars gold bullion has fallen 1.2%, first peaking near all-time highs at $2069 in March – following Russia's invasion of Ukraine – and then dropping to 2.5-year lows of $1614 in September as the US currency set fresh 2-decade highs amid the UK's chaotic tax-cutting budget from the Government of Liz Truss, the shortest serving prime minister in British history.
Monday saw the Dollar's DXY index edge down 0.3% as the Japanese Yen strengthened on a report that the Tokyo Government led by Prime Minister Fumio Kishida is set to revise a joint statement with the Bank of Japan over the latter's 2% inflation target, potentially paving the way for a tweak in the BOJ's ultra-loose monetary policy. 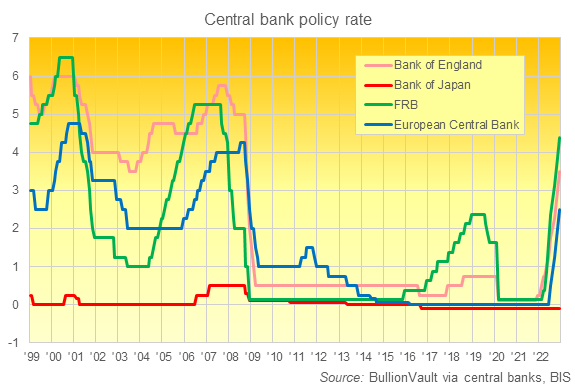 The BOJ has stuck to its dovish monetary policy, keeping the policy rate at -0.1% since September 2016 and is expected to leave its negative interest rate and yield curve control programs unchanged at the end of a 2-day gathering Tuesday.
Gold prices in Japanese Yen on Monday edged down 0.1% to ¥7,858 per gram, climbing 16% so far in 2022.
The UK gold price in Pounds per ounce meanwhile slipped 0.3% to £1472 but retained a rise of nearly 10% from the end of 2021 after retouching all-time highs at £1580 in September amid the turmoil caused by the "mini budget" from Liz Truss's short-lived government.
Gold priced in Euros edged down 0.2% to €1691 per ounce, rising by a less impressive 5% this year.
Gold-backed ETF trust funds shrank last week as the SPDR Gold Trust (NYSEArca: GLD) gave back all of its previous expansion on Friday and the iShares gold ETF (NYSEArca: IAU) saw its 16th consecutive weekly outflow of investor money.
The GLD gold ETF has liquidated 6.3% so far this year, while the IAU shrank 8.2%.
Last year the GLD and IAU shrank 16.8% and 6.5% respectively after expanding by almost one-half and one-third in 2020.
European stock markets were higher on Monday, bouncing back after two straight weeks of falls with the pan-European Stoxx 600 and London's FTSE100 both gaining 0.5% after Germany's Ifo index of economic sentiment showed a strong rebound, leading the institute to say that 2023's recession in the 19-nation Eurozone's largest economy will be milder than expected.