END_OF_DOCUMENT_TOKEN_TO_BE_REPLACED

GOLD DEMAND and supply through London trade saw prices pop 0.6% higher lunchtime Thursday, rising to $1273 per ounce after new data showed US jobless benefits claims rising more than expected last week.
Asian and European stocks markets meantime recovered earlier losses after New York closed lower overnight, while US government bond prices edged lower, nudging interest rates higher.
UK government bond prices also slipped, pushing 10-year Gilt yields up to 1-week highs at 1.42%, after the Bank of England held its key rate at a record low of 0.5% for the 86th month running, and governor Mark Carney called a yes vote to Brexit at next month's referendum on European Union membership  the biggest risk to the economy.
Gold priced in Sterling failed to rise above £880 per ounce however as the Pound then rallied versus the Dollar following the US jobs news.
The balance of gold supply and demand concentrated at Thursday's new Shanghai Gold Price benchmark earlier found a clearing price at CNY266.50 per gram – more than halving the equivalent premium over spot London quotes from yesterday to $1.80 per ounce.
Chinese-owned ICBC Standard Bank – a division of the world's largest bank – said Wednesday that it is joining the not-for-profit London Precious Metals Clearing Ltd, a group of 5 banks who provide clearing services to the world's central gold and silver market.
"The clearing of bullion in London is an essential element in the settlement of trades between counterparties from all over the world," said ICBC Standard Bank's chairman Mingqiang Bi, saying the move "further expands and enhances our commodities heritage, capabilities and expertise...recognis[ing ICBC] as a leading player in this market."
Global gold demand reached a near-record level between January and March, mining-backed market development organization the World Gold Council said Thursday, citing data estimates commissioned from specialist analysts Metals Focus.
This contrasts with last month's estimates from competitor analysts Thomson Reuters GFMS, who provided data to the World Gold Council until 2014. They said a fortnight ago that Q1 jewelry, coin and bar demand fell to the lowest combined level since the global financial crisis of Q1 2009 – back when the US central bank cut its key interest rate to 0% and began QE bond purchases in a bid to stem the collapse of asset prices, with the S&P500 index of US-listed companies hitting 13-year lows.
What TR-GFMS call "physical demand" excludes flows into or out of exchange-traded trust fund products (ETFs) and futures-exchange inventories. But including those figures, today's World Gold Council data put global gold demand 17% ahead of GFMS's estimate overall, with jewelry demand 29% larger, central-bank purchases 19% larger, and retail investment demand for small bars and coin 15% ahead.
"Shifts in the global economic and financial landscape," says the World Gold Council's own analysis of the Metals Focus data, led by head of market intelligence Alistair Hewitt, "have created a positive environment for gold investment in recent months.
"Uncertainty abounds."
China's largest jewelry manufacturer and retailer, Chow Tai Fook (HKG:1929), issued a profits warning Thursday, advising the Hong Kong stock market that it made 40-50% less in the 12 months ending 31 March from the previous year.
"The decrease [in profit]," said the Chow Tai Fook board, "is mainly attributable to...weak consumer sentiment in Greater China...and reduced gross profit margin...due to [an] unrealised hedging loss on gold loans and [a] change in the product mix, with increased sale of gold products" offering lower profit margins. 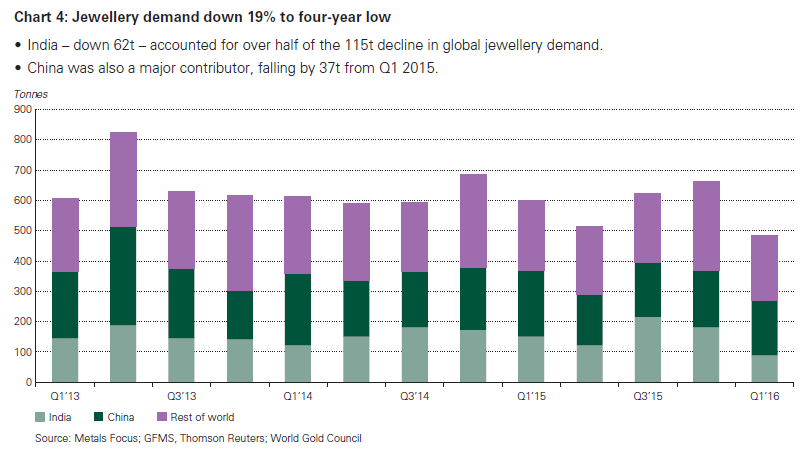