END_OF_DOCUMENT_TOKEN_TO_BE_REPLACED

GOLD and SILVER PRICES fell hard against all major currencies except the Aussie Dollar in London trade Tuesday, retreating ahead of New York's return from the long Labor Day weekend as major-market government bond prices fell in the face of massive new US debt issuance.
Washington is asking the bond market for $298 billion in new loans this week, adding 1% to its outstanding debt by Thursday's close.
The 10-year Treasury yield rose to 1.37% this morning, and inflation-adjusted TIPS yields reached -0.98% per annum, their least negative since mid-July.
Gold prices fell below $1810 per ounce and silver matched that 1.1% drop from before the Labor Day weekend. But longer-term, the inverse relationship between real US rates and gold prices is now the weakest in more than 2 years.
On a rolling 250-day basis, the correlation between gold-in-dollars and 10-year US TIPS yields has broken down to its weakest since May 2019, falling to 20.0% on the r-squared measure.
Averaging 55.6% over the last decade, it peaked at a series record 94.9% in August last year as 10-year TIPS yields broke what were then new lows beneath minus 1.0% and gold broke new highs above $2000 per ounce. 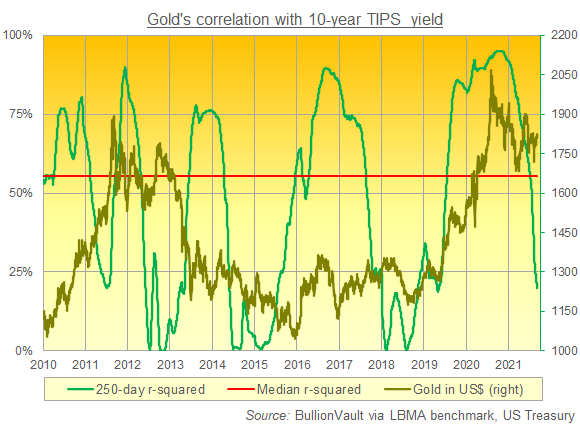 US debt markets will also see " huge corporate issuance" this week, on top of the near-record new debt already sold in 2021 to " lock in low-cost funding before the expected easing of Federal Reserve support," according to ratings agency S&P.
Outside the US on Tuesday, other major government borrowing costs also rose to the highest in 8 weeks, with Germany's 10-year Bund yield rising 4 basis points to -0.33% per annum and the UK's 10-year Gilt offering new buyers 0.74%.
Euro gold prices fell towards 2-week lows at €1525 – down almost 1.0% from last Friday's finish – but the UK gold price in Pounds per ounce fell less, slipping to £1312 as Sterling dropped following the government of Boris Johnson announcing controversial tax rises, breaching a 2019 election pledge.
The Reserve Bank of Australia – which has now gone 130 months without ever raising interest rates, the longest of any central bank worldwide – meantime confirmed September's 'taper' of monthly QE money-creation and bond purchases today, but pushed the end-date for its bond-market support back from November to February.
Cutting monthly QE from A$5bn to A$4bn as announced in August, "[This] reflects the delay in the economic recovery and the increased uncertainty associated with the Delta outbreak," the RBA said.
Poland and Canada will announce their latest policy decisions on Wednesday, followed by the 19-nation European Central Bank and No.2 silver miner Peru on Thursday.
With the ECB now openly discussing possible plans for an end to its pandemic-emergency QE bond purchases, corporate borrowers in the Eurozone have "never had more cash in the bank," reports Bloomberg today, "boosting investor confidence that corporate debt markets can weather rainy days caused by the spread of Covid-19 variants or the scaling back of central bank stimulus."
European stock markets slipped however on Tuesday, edging lower after Asia closed the day higher.
The EuroStoxx 600 index has now gone 17 trading days without setting a fresh all-time high, matching its longest stretch without a new record since April saw the index recover its pre-Covid Crash level of February 2020.
Last month saw the US S&P500 set new record highs on 12 out of 22 trading days.
"Digital gold can be a useful tool to de-risk portfolios given the meteoric rise in stock markets," said Somasundaram PR of the mining industry's World Gold Council today, commenting on India's fast-growing market in vaulted bullion traded online and via smartphone apps.
"Transparent, easy access and higher allocation through digital gold will help small equity investors absorb shock and volatility without knee jerk reactions, when correction ensues."