END_OF_DOCUMENT_TOKEN_TO_BE_REPLACED

GOLD PRICES spiked overnight Friday, erasing half of this week's earlier 3.6% drop before edging back but holding above $1800 per ounce as global stock markets sank and longer-term interest rates retreated from new multi-month highs on fast-spreading alarm over the Nu variant of Covid-19 identified by scientists in South Africa.
Silver prices split from gold – itself heading for the cheapest Friday finish in a month – by tracking a decline in base metals as fellow industrial precious-metal platinum also fell.
Both metals showed a loss from last Friday night of 5.5% as the weekend approached, trading below $23.50 and $980 per ounce respectively.
So-called crypto-currency Bitcoin sank by 10% meantime, plunging to its cheapest since early October and falling into what Bloomberg calls a "bear market".
Energy prices also plunged, knocking US crude oil almost 7% down for the day with European benchmark Brent now trading more than 10% below late-October's 3-year high.
European gas prices fell 3.0% even as colder weather brought snow across northern countries.
"This is the most significant variant we have encountered to date," said UK health security agency CEO Dr.Jenny Harries, agreeing with experts worldwide that B.1.1.529 – now confirmed in a quarantined traveller from Africa to Hong Kong – shows an "incredibly high" number of mutations which may make it more transmissable, more deadly, or more able to evade vaccine immunity.
"[It's] a clear reminder to everyone that this pandemic is not over." 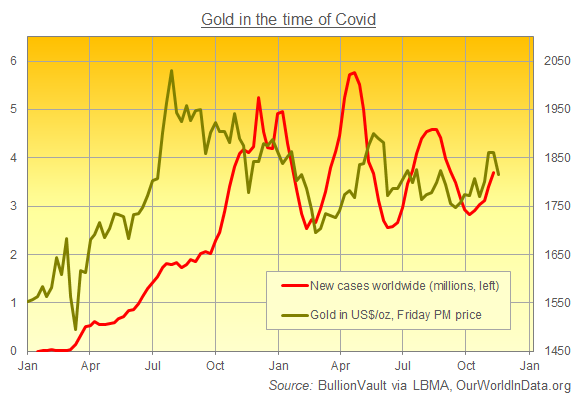 While gold's current all-time highs above $2000 per ounce came as the first global wave of Covid peaked in summer 2020, gold priced in Dollars shows only a weak correlation with the number of confirmed cases worldwide, giving an r-squared of just 7.0% on average on a 13-week basis since the pandemic began.
But the global spread of Covid-19 from Wuhan, China starting that January meant  global economic output fell harder than any time since World War 2 as governments imposed social restrictions including police-enforced lockdowns, and the stock-market crash of February to March 2020 saw global stock markets lose one-third of their value in US Dollar terms inside 6 weeks.
With Tokyo, Hong Kong and Mumbai equities closing Friday 2.5% down for the day, European bourses lost 2.8% by lunchtime on the EuroStoxx 600 index.
Major government bond prices in contrast jumped across the board as anxiety over the Nu variant spread, leading the UK and then European Union to suspend inbound flights from both South Africa and the surrounding region.
That drove longer-term interest rates lower, with US Treasury yields erasing all of this week's previous rise to 1-month highs on 10-year debt and new 20-month highs on 2-year bonds.
"The Fed is unlikely to alter its taper timeline" for reducing QE stimulus reckons one advisory of the US central bank's likely response, "[because] monetary policies are closely intertwined with the government's [view] that any change would be negative for their next election prospects."
"In my view, the ground has now been prepared for policy action" in the UK, said the Bank of England's new chief economist Huw Pill in his first public speech in the role today.
After the Bank stunned markets and analysts at the start of November by failing to raise its key overnight Sterling interest rate from the current all-time low of 0.1% per year, Pill last week "cast doubt on December rate rise" in comments made to journalists according to Bloomberg.
But "BoE's Pill sees growing case for December rate rise," was how competitor news and data-agency Reuters headlined its report.
The UK gold price in Pounds per ounce today touched £1360 before edging back £8 to trade 2.2% lower for the week.
Euro gold prices also spiked before giving back most of their overnight gains, briefly trading at €1610 per ounce but then falling €12 to stand 2.9% down from last Friday's finish in the London bullion market.