END_OF_DOCUMENT_TOKEN_TO_BE_REPLACED

GOLD PRICES fell almost $20 per ounce Friday afternoon in London, erasing all but $5 of the week's earlier gains as new data said the global economic re-opening continues to accelerate even as daily deaths and new infections from Covid-19 set a fresh record worldwide.
With a Norwegian climber today giving the first positive test on Mount Everest, the world's 2nd most populous nation India – hit by a shortage of oxygen and a series of fatal hospital accidents – reported almost 1/3rd of a million new cases.
"Suddenly, demand has gone down," Reuters quotes Kolkata bullion wholesaler Harshad Ajmera at J.J.Gold House.
"Consumers are also not willing to step out of their homes due to the coronavirus outbreak," with softer retail demand cutting the premium for gold landed in India versus the global storage and trading hub of London in half from last week's level to $2 per ounce.
China's stock market today bucked a wider drop in Asian and then European equities as the source of Covid-19 reported just 14 new cases for yesterday.
New York's exchanges then opened higher, reversing most of yesterday's drop in the S&P500 index, made following rumors that the Democrat White House of Joe Biden wants to raise capital-gains tax to help fund its massive Covid relief and infrastructure spending.
Crypto-currencies in contrast continued to tumble, taking Bitcoin down to 7-week lows beneath $50,000 – more than 25% below this month's fresh all-time high – while Dogecoin, the comedy crypto now facing competition from a rash of new tokens with obscene names, sank again after rising more than 6-fold last week. 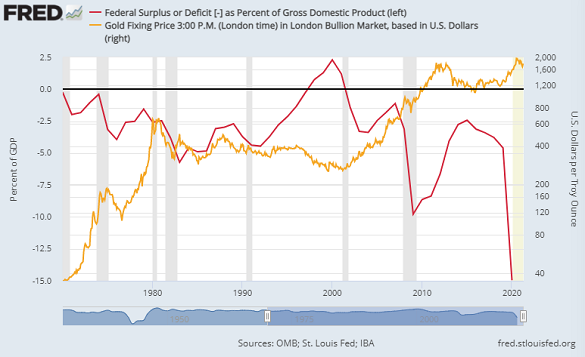 US business activity is expanding the fastest since at least 2014, said data-agency Markit of its preliminary April PMI surveys today, as "new order growth accelerated again...with firms noting the strongest upturn on record."
Services activity across the 19-nation Eurozone has meantime edged higher on a monthly basis for the first time since August.
UK manufacturing and services are showing their strongest joint-growth since late 2013.
Shanghai gold prices today cut their premium over London quotes to $6.70 per ounce as the Yuan weakened versus the Dollar on the currency market.
But on a weekly basis, the average incentive for new imports of bullion to gold's No.1 consumer market rose 60 cents since last Friday to $8.75 per ounce, firmly in line with historic levels after the record run of record discounts as demand collapsed during China's social and economic shutdowns amid 2020's Covid Crisis.
Among Western gold investment vehicles the giant SPDR Gold Trust (NYSEArca: GLD) today held on track for its 1st weekly expansion in 15 following Monday's 0.2% inflow.
But competitor gold ETF the iShare Trust (NYSEArca: IAU) yesterday shrank another 0.2%, down to its fewest shares in issue since early August and heading for its 5th weekly outflow.
Silver's giant ETF product, the iShares Silver Trust (NYSEArca: SLV) has meantime shrunk by another 0.7% so far since last Friday, heading for the 11th consecutive weekly liquidation since the Reddit Ramp spurred record inflows at the start of February.
Silver prices fell harder than gold on Friday, also erasing the week's earlier spike to the highest since start-March at $26.60 per ounce with a drop of more than a dollar.