END_OF_DOCUMENT_TOKEN_TO_BE_REPLACED

GOLD PRICES rose Monday, gaining as stock markets sank amid fears over major banks and bond prices rose amid an Opec threat to slash crude oil output, while the latest data showed speculators in Comex futures and options shrinking their bullish bets on bullion to the lowest since the Lehmans' crisis 14 years ago, writes Atsuko Whitehouse at BullionVault.
Last week's gross bullish betting on Comex gold futures and options by the Managed Money category was just below the low set at Christmas 2015, when gold prices finally bottomed at $1045 per ounce after sliding 45% from their 2011 global financial crisis peak of $1920.
Spot gold prices in the US Dollar today edged 0.3% higher to $1665 per ounce after rising 1.0% last week, the biggest gain since mid-August, while Treasury bond yields and stock markets both fell again while energy prices jumped.
"Gold holds above Friday's low at $1660, supported by geopolitical and financial risks and a cooling of the recent Dollar and yield surge," says derivatives platform Saxo Bank's commodity strategist Ole Hansen.
"At this stage the main buyer is likely to be money managers reducing short bets on Comex gold."
Latest data show that hedge funds and other leveraged speculators in Comex gold futures and options grew their bearish betting again in the week-ending last Tuesday – the 7th week in a row – to the most in 4 years.
More notably however, that's group's bullish bets meantime shrank for the 7th week running, dropping to the notional equivalent of just 244 tonnes of bullion – the smallest gross bullish betting among Managed Money traders since November 2008's Lehmans' chaos and beneath the low set 7 years ago when the start of US Fed rate hikes marked the end of gold's post-financial crisis bear market. 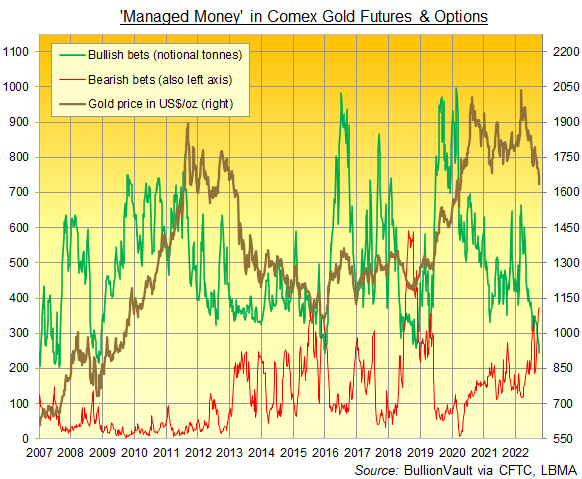 Overall, last week's position of Managed Money traders showed the heaviest net short betting since the price fell towards $1200 per ounce at the  end of November 2018.
Ten-year US Treasury yields – a benchmark rate for government as well as many finance and commercial borrowing cost – meantime fell 10 basis points Monday as bond prices rose amid another global drop in stock-market prices.
European stocks slumped as the new month and the new calendar quarter began, with the pan-European Stoxx 600 index dropping 1.3%, led by banking stocks after Swiss giant Credit Suisse confirmed it is looking to raise capital and its shares sank over 8% this morning.
"Recent weeks have shown a substantial rise in overall volatility and increased credit market stress," says Bruce Kasman, chief economist at US investment bank J.P.Morgan, pointing a rapid tightening in US monetary conditions with borrowing costs rising alongside the Dollar's FX exchange rate.
The Opec+ oil cartel, which combines the traditional Opec states with other major oil producers led by Russia, will this week consider slashing joint output by more than a million barrels per day, sources claim – the most significant production cut since oil prices went negative amid the first wave Covid-19 pandemic in early 2020.
"Saudi Arabia and other producers' move to restrict supply may be a reaction to the [US] Biden administration's talk about a price cap," reckons Kevin Book, managing director of ClearView Energy Partners in Washington.
Here in London meantime, and now faced with a credit downgrade to negative from stable by S&P Global Ratings last Friday, new UK Chancellor Kwasi Kwarteng scrapped his plan to cut taxes for the highest earners after a backlash from financial markets and ruling Conservative Party colleagues.
The Pound rallied on the news, adding almost 10 cents from last Monday's new record-low against the Dollar of $1.03, while longer-term UK bond yields fell to 3.70% on 30-year Gilts, now back down to levels last seen before Kwarteng's "mini budget" of unfunded tax cuts and energy-cost spending after the Bank of England intervened to buy long bonds and stem their price drop.
The UK gold price in Pounds per ounce fell 1.1% from Friday afternoon's London close as Sterling rose to one-week high in FX markets with the tax cut U-turn, while gold price in Euros rose 0.9% to €1708.