END_OF_DOCUMENT_TOKEN_TO_BE_REPLACED

GOLD priced in Dollars tested and failed to hold $1900 per ounce for the 7th time in 2 weeks in London trade Tuesday, dropping back as the bond market continued to give mixed signals over inflation ahead of this week's key US consumer price data.
Gold prices jumped through and then fell $10 per ounce from $1900 both in Asian dealing overnight and again in London at lunchtime.
"The yellow metal tested the psychological $1900 figure [yesterday] in New York trade," says this morning's note from Swiss refiners and finance group MKS Pamp, "however was unable to make headway through the key level.
"[But] fast-money positioning [is now] a lot cleaner after the two day purge last week, [with] US yields behaving while any signs of US Dollar strength was short-lived."
Latest data say that the week-ending last Tuesday saw hedge funds and other managed-money traders build their largest bullish position on gold futures and options since New Year.
Net of bearish bets, the Managed Money's long position on Comex gold derivatives grew 2.3% from the Tuesday before according to data reported to regulator the CFTC, reaching the notional equivalent of 403 tonnes of bullion.
As a proportion of all Comex gold contracts open last Tuesday however, the Managed Money's net long position was the largest since March 2020 at 19.0%.
That compares with a 10-year average of 14.5%. 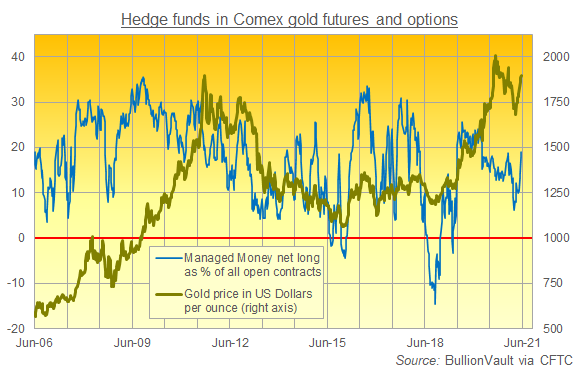 With gold prices sinking 2.7% between last Tuesday's CFTC reporting time and Thursday's 2-week low, "[Last week's] price action shows that the gold price had gone too high too fast," agrees a note from the precious metals team at French bank and London bullion market maker BNP Paribas.
"Turning the first 5 months of [2021] loss into gains should take some more effort, as investors are quick to take profit nowadays."
Yesterday saw giant US-listed gold ETFs the GLD and IAU both shrink as shareholders sold out, liquidating 0.6% and 0.2% respectively.
The massive SLV silver trust in contrast did not change in size for a 3rd day running.
Silver prices on Tuesday tracked gold's volatility, very nearly touching $28 per ounce before sinking 45 cents.
That kept the Gold/Silver Ratio of the 2 former monetary metals relative value at 68.3 for a second day, below last Friday's 7-week high for 1 ounce of gold being worth 69.1 ounces of silver.
The Dollar today held steady against the world's other major currencies after erasing last week's jump to mid-May levels.
US Treasury bonds meantime rose in price, edging 10-year borrowing costs down to 1.53% as 10-year inflation – as forecast by index-linked bonds – continued to hold near the lowest in 6 weeks at 2.38% per annum.
But 5-year inflation forecasts, as projected by forward rates in the Treasury market, remained in the uptrend starting at March 2020's Covid Crash low of 0.86%, reaching 2.27% yesterday.
Gold prices in No.1 consumer nation China meantime deepened their discount to London quotes today, moving $20 per ounce below prices in the metal's key storage and trading hub after dramatically snapping 2021's run of positive incentives for new imports last week.
Both Eurozone and Japan's GDP for Q1 came in better than expected on new data, with the world's 2nd and 4th largest economic blocs shrinking 0.3% and 1.0% from the last 3 months of 2020 respectively.