END_OF_DOCUMENT_TOKEN_TO_BE_REPLACED

GOLD PRICES briefly dipped back below $1770 per ounce Tuesday afternoon in London after new data showed a jump in bullion imports to China – the metal's No.1 consumer nation – while the US Dollar rallied and longer-term interest rates turned higher in the bond market.
Global stock markets also retreated, dropping from Monday's latest record high on the MSCI World Index as tensions worsened between Russia and the Western Nato countries over Ukraine, as did most so-called cryptocurrencies.
Bitcoin has now lost over 12% from last week's fresh record high following news that currency-crisis hit  Turkey is banning crypto-payments and US authorities are moving to pursue money laundering through digital assets.
Comedy crypto Dogecoin today lost 10%, pulling its market cap back down from last week's record $52 billion – greater than many major Western banks including the UK's Barclays and Switzerland's Credit Suisse – despite social-media calls to buy in celebration of #DogeDay, coinciding with 'potheads holiday' 4/20.
Gold prices yesterday peaked at $1790 – the highest in 7 weeks and $110 above March's retreat to fresh 9-month lows – as 10-year US Treasury yields fell near 4-week lows at 1.56%.
That rate rose to 1.61% today ahead of Washington's next auctions of new 2-year, 5-year and 7-year debt, scheduled for Thursday. 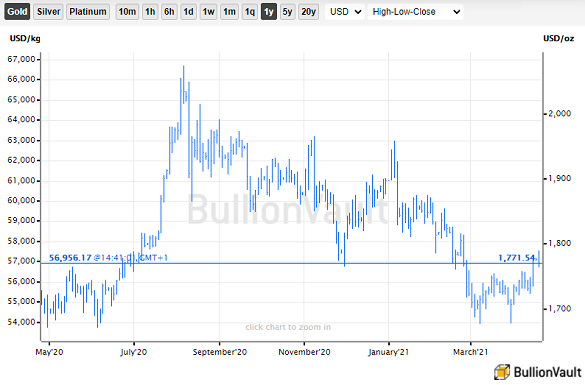 "Smaller auctions would be easier to digest" Bloomberg quotes economist Thomas Simons at brokerage Jefferies after poor demand hit some recent Treasury debt sales, driving the US government's borrowing costs higher just as new president Joe Biden seeks to add $2 trillion of infrastructure spending to his $1.9 trillion of Covid relief and stimulus approved by lawmakers last month.
March's federal deficit totalled $660bn, the 3rd largest monthly sum in history.
"The signal that we've hit the top in [auction] supply would help to tighten up the auctions even before the cuts come," says Simons.
Gold prices in China meantime cut their premium over London quotes to $7 per ounce on Tuesday, retreating from the recent average incentive for new shipments of $10 as customs data showed the heaviest net bullion imports since January 2020, eve of the Covid pandemic and lockdowns which drive Chinese wholesale prices to record deep discounts as supply swamped demand.
"China's gold imports in the first quarter of 2019 were 288 tonnes," says Rhona O'Connell at brokerage StoneX, "and slumped to 111t in Q1 2020.
"In the first quarter of this year they were just 54t so there is some way to go before the glory days of the past are resumed."
With China now the world's No.1 domestic gold mining nation since 2007, a "flurry of Chinese M&A" in the sector took a pause yesterday, reports Reuters, after Chifeng Jilong (SHA: 600988) – now valued at $4bn on the Shanghai stock market – cancelled a $105m purchase of the Bibiani gold mine in Ghana, Africa's No.1 gold-mining nation, following interference in the seller's lease over the site by the Accra government.
Russian police meantime raided and detained several associates of Kremlin critic Alexei Navalny – now in a prison hospital on hunger strike – while the US State Department slammed Moscow's vow to shut parts of the Black Sea to foreign navies as " yet another unprovoked escalation in Moscow’s ongoing campaign to undermine and destabilise [neighboring] Ukraine."
Russia has now massed 100,000 troops on its land border with Ukraine according to the European Union, if not 110,000 (Kyiv's figure) or 150,000 (EU diplomat Josep Borrell).
The Ruble today fell below 1.3 US cents on the FX market, dropping towards early April's 6-month lows and coming within 0.1 cents of January 2016's record weakness.
"The world wants justice, not hegemony," said President Xi Jinping if China, itself at loggerheads with the US over Taiwan and the disputed Whitsun Reef near the Philippines, at the annual Boao Forum for Asia today.
"A big country should look like a big country by showing that it is shouldering more responsibility."