END_OF_DOCUMENT_TOKEN_TO_BE_REPLACED

GOLD BULLION failed on Friday to hold a bounce from yesterday's steep plunge, heading for its lowest weekly close since April in Dollar, Euro and also Sterling terms after strong US data hardened expectations that the Federal Reserve will start tightening monetary policy by announcing QE tapering at next week's meeting.
"Yesterday's retail sales data added more fuel to the hawks' fire," says Friday's client note from bullion-market specialist Rhona O'Connell at brokers StoneX, "following Wednesday's strong manufacturing figures."
Having dropped $50 on Thursday, gold bounced $20 overnight and during Asian and London trade today, but bullion then gave back half of that rally to slip through $1760 per ounce once more.
Gold bullion hasn't fixed that low at London's 3pm benchmarking auction since 9 April, less than 2 weeks after the metal re-touched early March's 10-month low of $1675 in spot trade.
"Federal Reserve officials will seek to forge agreement at their coming meeting to begin scaling back their easy money policies in November," said a Wall Street Journal article earlier this week, a signal that 'back channel messaging' has begun.
Global stock markets were mixed today after Wall Street slipped again from its latest new all-time highs on Thursday's economic data.
Both short-term and longer-term government bond yields were little moved Friday, but 5-year US Treasury yields rose above 0.85% per annum, the highest such borrowing cost for Washington since before Powell spoke at Jackson Hole, giving what most analysts took to be a 'dovish' speech.
Fed chair Jerome Powell in fact made it clear in last month's Jackson Hole speech that tapering was now certain if not imminent, saying that "The timing and pace of the coming reduction in asset purchases will not be intended to carry a direct signal regarding the timing of interest rate liftoff." 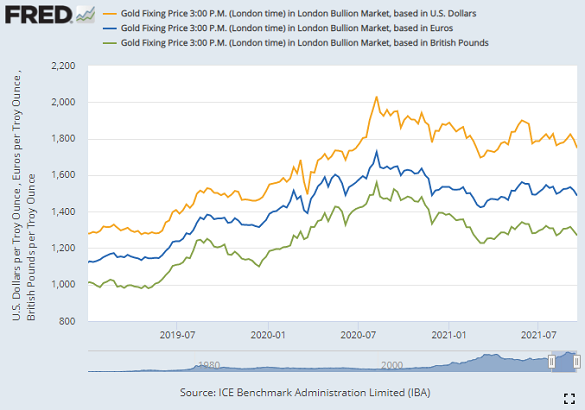 Commodity prices retreated again Friday after their spring and summer 2021 surge, with lower natural gas helping trim wholesale European electricity prices to 'just' 70% year-to-date jumps.
Thursday's price slump in bullion saw the number of shares issued in giant gold-backed ETF the SPDR Gold Trust (NYSEArca: GLD) expand very slightly, on track for the 1st weekly growth in 7 with net investor demand up 0.2%.
The smaller iShares gold ETF (NYSEArca: IAU) was unchanged yesterday but 0.3% larger from last Friday's finish, heading for its 3rd weekly expansion.
Silver's largest ETF product – the iShares Silver Trust (NYSEArca: SLV) – did not change in size on Thursday despite the gray and more industrial precious metal sinking by 5.4%, almost twice the move in gold bullion.
Silver prices also bounced early Friday but then fell back, trading around $23 per ounce at midday's benchmarking in London for its lowest weekly finish since 25 September 2020.
Comparing the two formerly monetary metals, the ratio of gold prices to silver bullion quotes today held above 76, the yellow metal's highest valuation in silver for 4 weeks.
Platinum prices in contrast held onto their overnight rally, trading almost unchanged from Friday last week at $958 per ounce after falling to new 9-month lows beneath $925 on Wednesday.
"It is possible," says O'Connell at StoneX of gold bullion, "that there may be [investment] institutions taking advantage of this fall in order to pick up some value.
"At the physical level, however, the story is different...There has been no discernible bargain hunting in China in the face of this fall, but this may well be partly because there are National Holidays coming up next week (mid-Autumn Festival) and the first week of October is the week-long National Holiday.
"The fact that Shanghai is still at a [low but] steady premium to loco London reflects low import levels."