END_OF_DOCUMENT_TOKEN_TO_BE_REPLACED

GOLD BULLION rose 1.3% in London on Tuesday from overnight lows in China and Asian trade, touching $1080 per ounce – and setting a new all-time premium over platinum prices – after Turkey confirmed shooting down a Russian fighter jet near the Syrian border.
Western equity markets fell badly, and US Treasury bond prices rose, until revised US data then showed the world's largest economy growing faster than first estimated in the third quarter, up by 2.1% per year.
With a smaller trade deficit in goods, the US data also showed higher personal consumption expenditure prices – the preferred inflation measure for central bank the Federal Reserve, set to vote on raising interest rates from 0% next month for the first time in 7 years.
Bullion retreated to $1075 per ounce – back below last week's closing level – as New York's stock market recovered.
Silver held firmer, trading above $14.20, as copper rallied from new 7-year lows and nickel bounced from its lowest price since 2003.
Gold prices are making "random fluctuations for no apparent reason," says a note on Monday's action from David Govett at London brokers Marex Spectron, "with the price generally ending up back where it started."
"On the daily chart," adds London bullion market makers Scotia Mocatta's technical analysis, the new 5.5-year low of $1066 "held twice [last] week.
"Support below $1066 is seen at $1045, the low from 2010...A close above $1095 is now needed to bring in fresh buying" by speculative traders in futures and options contracts, it adds.
"Physical demand in China is strong," says a note from investment, retail and bullion bank HSBC, noting the China Gold Association's estimated 8% growth in the country's end-user demand in Q3 against the same period last year.
That "more than offset weak first-half consumption," says HSBC, with the rise in China's gold demand attributed "to the drop in domestic equity markets earlier in the year and a sluggish property market.
"Low prices also acted as an incentive for consumers."
Half-year revenues at Chow Tai Fook – the world's largest jewelry retailer – fell 4.1% versus March to September 2014 in Hong Kong Dollar terms the company said today, slipping to the equivalent of US$3.6 billion.
But while sales of gem-set, watches and platinum jewelry all fell, its same-store sales of lower-margin gold products – as Chow Tai Fook warned last month – rose 10% after plunging more than 35% year-on-year in 2014.
That helped gross profits decline almost 16% year-on-year to the equivalent of US$1.01bn.
"Revenue from non-gold products recorded a year-on-year decrease, signaling a continual weak consumer sentiment," the company said.
With gold priced in HK Dollars dropping 9% over the last year, Chow Tai Fook's total inventory of all raw materials and unsold products also fell 9% by value to the equivalent of US$3.7bn.
"Disappointing quarterly earnings and falling share prices," said Japanese news-group Nikkei's Asian Review last week, "reflect just how severely the slowdown in China is affecting companies across the region."
Even within $10 of last week's near 6-year low, gold bullion today hit a record high over and above platinum prices – now down 15% since the VW diesel emissions scandal broke in September. 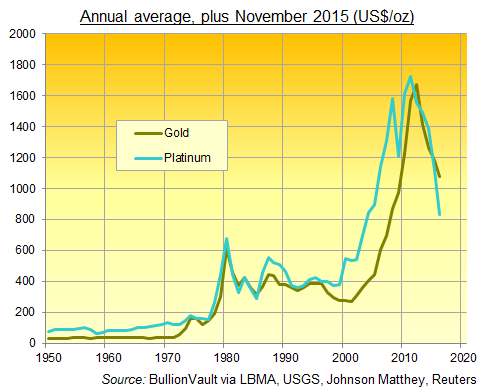 "Platinum was at a discount to gold in 2011 and 2012 at the height of the gold bull run," notes specialist news and data providers Platts, "but it never exceeded $200 per ounce."
Gold's premium to platinum today hit $240 per ounce as the white metal hit new 7-year lows.
"The discount is so wide – it's crazy," Platts quotes one Hong Kong dealer. "It could take the appeal off of platinum being a luxury metal for jewelry manufacturers in Asia."