END_OF_DOCUMENT_TOKEN_TO_BE_REPLACED

GOLD BULLION continued to trade in a narrow range on Monday as the world's major currencies held flat following the UK's "Super Saturday" flop – with an emergency sitting of Parliament failing to find any conclusion to the Brexit crisis – as the IMF central-bank meeting in Washington coincided with ongoing trade talks between China and the United States, writes Atsuko Whitehouse at BullionVault.
Priced in the UD Dollar – currently showing its weakest month since New Year 2018 on the currency market – wholesale gold bullion was unchanged at $1491 per ounce, in line with where it began and ended last week.
The UK gold bullion price in Pounds per ounce meantime jumped 0.9% at the start of Monday's Asian trade, touching £1158 as Sterling dropped hard, only to reverse that move as the Pound rose to $1.30 for the first time since May.
Ahead of the latest Brexit moves, latest data show that hedge funds and other leveraged speculators in Comex gold futures and options cut their net bullish betting 12% to the smallest in 12 weeks on gold as a group in the week-ending 15th October.
That was down nearly a quarter from the highest net long positions ever recorded, when the spot price of physical bullion hit 6.5-year highs. 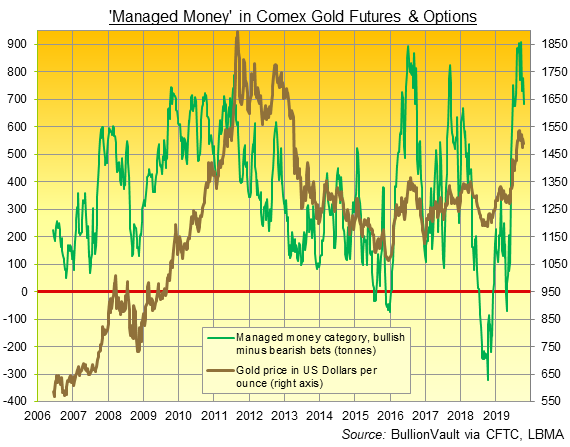 "The markets are quite long, and people are worried about the trade war. Investors are waiting for pull-backs in gold to step in again," Reuters quotes AxiTrader market strategist Stephen Innes.
With Prime Minister Boris Johnson wanting to hold a vote today on his revised proposal for UK withdrawal from the European Union, "The FX market now seemed to be betting on the deal being approved," reckons Saxo Bank's head of FX strategy John Hardy.
Refusing to sign the letter he sent to Brussels yesterday, asking for a Brexit extension as demanded in law, Johnson believes that he "has the numbers" to win, but Speaker of the House John Bercow must decide to let the vote go ahead.
Scotland's highest court is meatime considering whether Mr Johnson has fully complied with the law in his correspondence with Brussels.
"If Mr Johnson runs into serious trouble or MPs force a [second] referendum, then countries led by Germany will push for a longer extension, to as late as June next year," reported The Sunday Times, citing unnamed diplomatic sources.
Gold prices for European investors on Monday edged 0.1% lower to €1335 per ounce.
Gold premiums in China – measuring the incentive for new imports of bullion to the metal's No.1 consumer market – today traded up to $6.60 but stayed well below their historic average of $9 per ounce.
On Saturday China's vice-premier Liu He said Beijing has made "substantial progress" with the US to lay the foundation for a phase one agreement for rolling back some of the tariffs each side has imposed on the other's goods during the 'trade war' starting last year.
Japanese exports fell for a 10th straight month in September, and South Korean exports plunged 19.5% over the first 20 days of October from a year earlier, led by weak sales to China, according to data released on Monday.
Data released Friday showed Chinese economy expanding at just 6.0%, the slowest in almost three decades as the bruising trade war hit factory production and investment sentiment.
Attending the annual IMF meeting in Washington, People's Bank of China Governor Yi Gang said that Beijing's focus remains on keeping its heavy debt load under control, rather than boosting stimulus.
In contrast, "All tools can be applied," said the IMF's steering committee in a statement, also urging greater fiscal spending by govertnments where "appropriate" to stem the global slowdown in economic growth.