END_OF_DOCUMENT_TOKEN_TO_BE_REPLACED

GOLD BULLION marked today's 10th anniversary of the UK's Northern Rock banking run as the best-performing major asset class bar none for UK investors since mid-September 2007.
Physical gold bars have beaten the total return from shares and bonds over the last 10 years, with the  UK gold price in Pounds Sterling gaining 189%.
That means gold bullion has outpaced even London house prices.
Ignoring all transaction costs, official data say London residential property prices have risen 64% (not accounting for possible rental income) since the run on Northern Rock, while conventional 10-year Gilts have paid 81% (constant maturity, capital plus yield).
Falling by almost a half to the depths of the global financial crisis in early 2009, the UK stock market has returned 79% overall (FTSE All Share Total Returns index, including dividends, not allowing for tax).
Physical bullion meantime doubled to its peak of September 2011, rallying since the slump of 2013 to rise from £347.58 on the day the Northern Rock crisis broke to £1003.85 per ounce at this morning's LBMA Gold Price benchmarking auction. 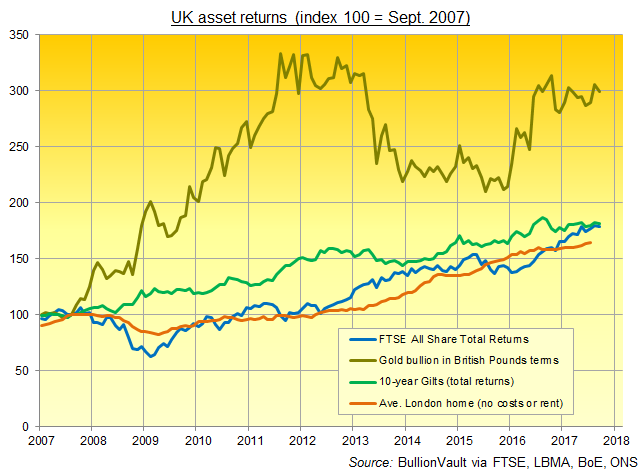 13 September 2007 saw Northern Rock – then the UK's fifth largest bank – ask the Bank of England for emergency lending as the global credit crunch starting a month earlier froze its vital but short-term source of finance.
After the BBC's Robert Peston reported the news that evening, lines of savers formed outside branches of NRK the following morning, marking the UK's first retail banking run since the late 19th Century.
"Gold [today] is being kept in check by the increased risk appetite among market participants," says the latest analysis from German financial services group Commerzbank, noting yesterday's new record high in the US stock market.
World stock markets held just shy of their new all-time highs Wednesday morning, while the US Dollar rallied again on the FX market from last week's 2.5-year lows.
That curbed the gold price in Dollars at $1330 per ounce – some 2.0% below last week's new 12-month highs – while bullion rose for Euro investors above €1112, halving this week's previous 1.1% drop.
"Many factors were at play" in gold bullion's jump last week, says a note from German-based refining group Heraeus, including worries about the US debt ceiling, the economic impact of Hurricane Harvey and then Storm Irma, and also "uncertainty" about the US Federal Reserve's willingness to raise Dollar interest rates more than once again in 2017.
But with gold prices now at $1330, "There is not a lot of demand" for physical bullion, says Barry Canham of brokerage INTL FCStone, especially from the traditional consumer markets of Asia.
"I don't think the gold price is being driven by demand. It's being driven by safe-haven [interest]" from financial players.