END_OF_DOCUMENT_TOKEN_TO_BE_REPLACED

GOLD BULLION rallied in London on Friday, heading for a 3rd consecutive weekly loss against the Dollar but bouncing over $20 per ounce from yesterday's drop near 18-month lows after mixed US jobs data suggested that the Federal Reserve may slow the pace of its interest-rate hikes.
Non-farm payrolls expanded by 315,000 in August, the Bureau of Labor Statistics said, just ahead of analyst forecasts.
But average pay growth failed to accelerate from 5.2% per year as expected – lagging consumer price inflation last estimated near 9% per year – and the unemployment rate jumped from 5-decade lows of 3.5% to 3.7% last month as more people joined the labor market in search of work.
US stock markets opened higher while European bourses extended Friday morning's rally, as did energy and industrial commodity prices.
"If you're the Fed, this is the kind of rising unemployment you want," says one FT journalist, "from people leaving inactivity and looking for work, rather than layoffs. Soft-landing-ish...for now."
"This is key," says brokerage Charles Schwab's chief investment strategist. "Prime-age labor force participation rate surged to 82.8%, quickly approaching pre-pandemic high."
Despite repeated promises by Fed officials of further steep rate hikes ahead, betting on the US central bank raising its overnight interest rate by another 75 basis points at its September meeting in 2 weeks' time fell on Friday's jobs data, dropping from a record 75% of all speculative positions to 69%.
Longer-term bond yields were little changed however, with 2-year Treasury bonds offering 2.43% per annum, just shy of mid-June's 14-year high.
Real interest rates as predicted by the yield on 10-year TIPS yesterday rose to 0.81% per annum, the highest since mid-June's 41-month high.
London bullion bought and sold at Thursday's afternoon benchmarking auction fixed below $1700 per ounce for the first time since March last year after dropping in spot trade towards gold's post-Covid lows of $1685. 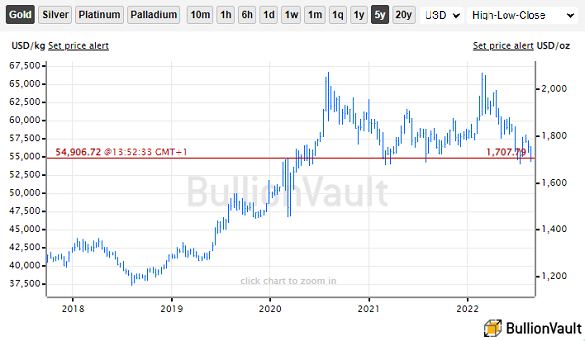 Over in India – the world's No.2 gold consumer market – " Demand has improved this week because of price drop," Reuters quotes one Mumbai gold dealer.
With imports of the precious metal falling in recent weeks, that has helped the domestic bullion price jump to a $2 per ounce premium over global quotes, the news-wire says, after trading at a $7 discount in late August to suggest weak local demand.
Premiums in No.1 gold consumer China meantime hit a fresh 6-year high above $25 per ounce today, defying weak demand as dealers complained about a lack of new bullion import quotas from the People's Bank.
"There's less customer interest," says dealership Wing Fung Precious Metals, "so in the Shanghai exchange trading is very thin but the premium is very high."
Anti-Covid lockdowns are adding to the confusion, Reuters says, as global jewelry hub Shenzhen – also home to tech manufacturers and digital giants such as TenCent –  imposed 3 days of restrictions in key part of the 17-million city in the face of 62 new cases of the virus recorded on Wednesday.
Gold bullion imports through Hong Kong hit a 9-month high in July, while direct bullion inflows from Russia – locked out of Western markets by industry bans and government sanctions over Moscow's invasion of Ukraine – leapt almost 50-fold from the same month last year.
Silver prices rallied with gold bullion on Friday's jobs data, briefly topping $18 per ounce after sinking to new 2-year lows on Thursday.
Gold priced in the Euro rebounded to €1710 while the Sterling price of bullion remained unchanged for the week at £1480.