END_OF_DOCUMENT_TOKEN_TO_BE_REPLACED

GOLD BULLION reversed yesterday's drop against a weaker Dollar on Wednesday, briefly trading back above last weekend's level for US investors and also rising in Euro terms as the single currency rose on the FX market following calls from European Central Bank policymakers for a slowdown and end to the ECB's massive Covid-pandemic QE bond buying program.
Consumer-price inflation across the 19-nation currency union hit a 10-year high in August.
Having set its highest weekend level since mid-June at last Friday's finish, the gold price in Euros today held €3 lower at €1537 per ounce.
Bullion for Dollar investors meantime touched $1819 and the UK gold price in Pounds per ounce reached £1320, also in line with last week's finish.
Silver also rose more for Dollar investors than in Euro terms, regaining the $24 level after new survey data said both the Eurozone and UK's manufacturing sectors continue to expand at a near-record paces despite worsening supply-chain bottlenecks.
"We have a long history of fear of inflation in our DNA," Germany's Focus magazine quotes a bullion coin and bar dealer in Leipzig, "and now the risk of inflation is rising again."
With Eurozone bond yields easing back from yesterday's rise to multi-week highs, European stock markets rose again, seeing the EuroStoxx 600 index recoup Tuesday's 0.4% drop to trade 30.0% higher from this time last year.
It has set a series of new all-time highs in 2021, gaining 10.2% from its pre-Covid top and almost doubling from the depths of the Eurozone Debt Crisis a decade ago.
The largest Euro-denominated gold-backed ETF – Xetra Gold (ETR: 4GLD) – has meantime risen less than 20% in price. 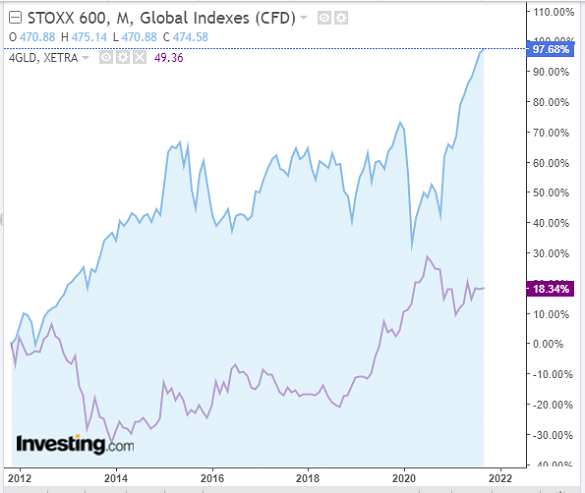 Echoing comments from some Federal Reserve officials about the US central bank's QE program and tapering plans, "We are now in a situation where we can think about how to reduce the pandemic special programs," said ECB council member Robert Holzmann, governor of the central bank of Austria, yesterday, saying that a reduction of the Eurozone's pandemic emergency bond buying (PEPP) will "definitely" be up for discussion at next week's ECB meeting.
"I would expect a decision that should not be incompatible" with the PEPP's current March 2022 deadline, agreed Dutch central bank governor Klaas Knot in separate if more tortuous comments.
"That would imply a reduction in the purchase pace."
But "I would advise caution regarding the course of inflation relative to our medium-term target," countered their ECB colleague Yannis Stournaras, Bank of Greece governor, today.
"Wage developments and unit labor costs, which determine the core of inflation, do not show the same volatility as headline inflation," he told Bloomberg earlier.
The European Central Bank currently owns 1/3rd of Greece's government debt, and its continued buying of around €2bn per month – with the total stock of Greek debt around €78bn – means that "the ECB's holdings could exceed 50% by March 2022, when the programme is scheduled to end," says one estimate.
The gap between Italian and German bond yields – a measure of how investors price risk vs. return for the Eurozone's 1st and 3rd largest national economies – rose only slightly following Holzmann's comments and edged back Wednesday, continuing to hold above 100 basis points but sharply below 2020's Covid Crisis highs near 300bps or the early 2010s' EZ Debt Crisis highs above 500.
China's economic recovery has meantime stalled, new data said Wednesday, with the Caixin PMI index of manufacturing activity reading below 50 in August – the first such contraction since April 2020, and also blamed on supply-chain problems hitting output.
Services activity in the world's No.1 gold bullion consumer market also contracted on the Chinese government's own NBS index, the first sub-50 reading since last February's Covid plunge.