END_OF_DOCUMENT_TOKEN_TO_BE_REPLACED

GOLD BULLION slipped against a weakening Dollar on Thursday, dropping to $1780 per ounce before bouncing $10 but also erasing this week's earlier 1-month high for Euro and UK investors ahead of tomorrow's much-anticipated comments on QE tapering and US interest rates from Federal Reserve chair Jerome Powell.
Stock markets and commodity prices also retreated with gold bullion ahead of Powell's speech on Friday at the annual Jackson Hole central-bank symposium, with silver dropping to $23.65 per ounce.
The UK gold price in Pounds per ounce dipped below £1300 – a new record high when first reached the Covid Crisis began in February 2020.
Gold bullion priced in Euros also erased this week's earlier highs to trade at €1521.
"Tapering is not tightening," says one asset manager to the UK's Investment Week magazine, which headlines its summary of Jackson Hole predictions: "Tapering without the tantrum".
But "It is a universal aspect of quantitative easing that today's yields incorporate market expectations about future purchases," says Philip Lane, former head of the Central Bank of Ireland and now a member of the Executive Board of the European Central Bank, in an interview with Reuters.
US Treasury bond yields edged higher again Thursday, reaching new 2-week highs at 1.36% but still lagging the latest official estimate of US consumer-price inflation by more than 4 percentage points.
Government bond yields for Germany – the 19-nation Eurozone's largest economy – have sunk this summer to new all-time record lows once adjusted for consumer-price inflation.
July saw real 10-year Bund rates fall further according to Destatis' estimate of inflation, dropping further than our chart shows to -3.9% as Germany's cost of living rose at its fastest pace in 3 decades. 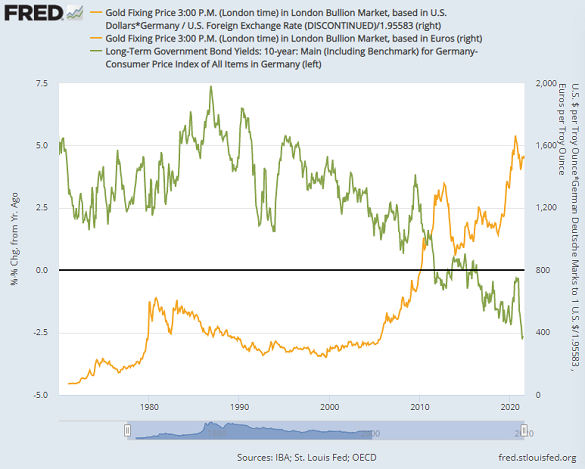 Lane's fellow ECB policymakers "acknowledged that [his proposed] reformulation of interest rate forward guidance would imply an almost certain overshoot of the two per cent inflation target," at their July meeting, minutes released Thursday said.
Inflation across the 330-million citizen Eurozone reached a 3-year high of 2.2% last month, but hit 3-decade highs at 3.8% in No.1 economy Germany.
Following the Euro central bank's July strategy review, the agreed policy statement made no changes to the Euro central bank's negative interest rates and unlimited QE, but aimed to say that the ECB's 2.0% annual inflation target – which it has undershot almost without break between 2013 and this summer – "should be reached on a durable basis," the meeting notes explain, "rather than as the result of short-lived forces that led to one-off price increases but were unlikely to lead to persistently higher year-on-year inflation."
Refusing to say whether the ECB will continue its massive Pandemic Emergency QE program beyond its current March 2022 expiry, "It looks like bottlenecks are going to be more persistent than expected," Lane adds in his Reuters interview, but those inflationary pressure are balanced by "some moderation in the world economy...and the Delta variant, [which] remains a headwind."
"A supply chain crunch that was meant to be temporary now looks like it will last well into next year," says Bloomberg.
"The cost of sending a [shipping] container from Asia to Europe is about 10 times higher than in May 2020. The cost from Shanghai to LA has grown more than sixfold."