END_OF_DOCUMENT_TOKEN_TO_BE_REPLACED

GOLD BULLION edged higher for the week so far in most major currencies on Wednesday, rising to $1770 per ounce in Dollar terms but lagging yesterday's spike to 4-week highs following 'hawkish' comments on monetary policy from 2 members of the US Federal Reserve.
Last week's widely-anticipated Fed rate hike – the second 75-basis point hike in succession – had seen gold bullion rally sharply along with equities and bond prices as fears of recession grew and market-based forecasts of inflation fell.
But with consumer-price inflation now running at 4-decade highs above 9% per year, the US central bank is "nowhere near" being done with raising short-term interest rates, said San Francisco Fed President Mary Daly – a non-voting member this year – on Tuesday.
"We have made good start...but inflation is far too high. We are still resolute and completely united." 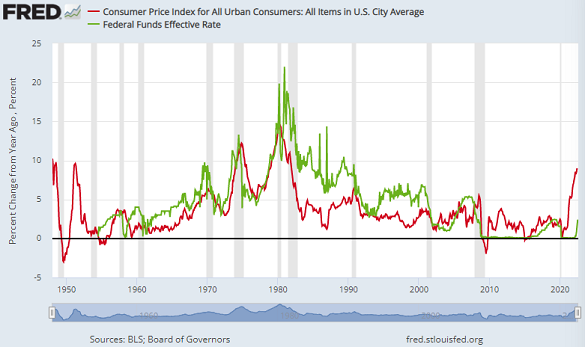 "Inflation has come in hotter than what I would have expected," agreed voting FOMC member James Bullard, President of the St.Louis Fed, in a separate speech.
"I think we're going to have to go a little bit higher [with Fed rates]," says Bullard – who predicted last year that US inflation would slow from 3% to 2.5% in 2022, and who now says the US economy can avoid recession despite borrowing costs needing to rise perhaps to 4% on his new outlook from the current Fed Funds level of 2.5% per annum.
Betting on a 3rd successive Fed rate hike of 75bps at the central bank's September meeting has now leapt to 1-in-2 after falling to 1-in-5 on Tuesday morning.
Bullion for Euro and UK investors also rallied on Wednesday, with gold rising to €1737 per ounce – some €15 below Tuesday's 4-week high – and to £1454 respectively, some £10 below yesterday's 3-week high in Sterling terms.
"It is too early to make a substantive call," says bullion-market specialist Rhona O'Connell at brokerage StoneX, "but recent actions suggest that gold is starting to look at market uncertainties as supportive rather than fears of interest rates choking things off.
"The recent rally is still only a correction, but may be a sign of shifting sentiment, especially as silver has moved too."
Silver prices fell overnight below $20 per ounce, but rallied back to cut this week's loss so far to just 20 cents at $20.13, fully $2 per ounce above mid-July's 2-year low.
Betting on tomorrow's UK interest rate decision from the Bank of England meantime backs a Reuters poll which says 70% of traders expect a half-point hike – London's first in almost 3 decades – after Governor Andrew Bailey last month said a rise of 50bps looked possible.
Currently setting UK rates at 1.25%, he vowed "no ifs or buts" in bringing UK inflation down from the current 9% level to the Bank's 2% target.
Longer-term US interest rates today extended Tuesday's jump following Daly and Bullard's comments, taking 10-year Treasury bond yields up to 2.78% after their steepest 1-day rise mid-June's spike to decade highs at 3.49% per annum.
So-called 'real yields' on 10-year inflation-protected Treasury debt yesterday also surged yesterday, rising by 18 basis points from Monday's 3-month low of 0.09%.
Taking TIPS yields up to 0.27%, that also marked the sharpest rise since mid-June, when this market-implied real rate of interest peaked at the highest in 3.5 years at 0.89%.
European stock markets meantime rallied from yesterday's sharp drop as US Speaker of the House Nancy Pelosi prepared to head home from Taiwan, now encircled by Chinese military engaging in what Beijing calls "drills" as the Communist dictatorship continues to lambast Washington for the "provocation" of her visit to what it says is part of its sovereign territory.
Base metals slipped again but crude oil rose back above $100 per barrel of European benchmark Brent and wheat prices, after erasing all of the Russian-Ukraine invasion, also extended their bounce even as the first shipment of Ukrainian grain allowed safe passage by Moscow out of Odessa was cleared to leave Turkish waters for delivery to buyers in Lebanon.
New data today said Eurozone retail sales sank harder than analysts expected in June, while the S&P Global Composite PMI survey confirmed that overall business activity in the 19-nation currency union slipped last month for the 1st time since February 2021.
US data yesterday said job openings shrank again in June, dropping to a new 2021 low almost 2 million below April's all-time record of 12.3 million.