END_OF_DOCUMENT_TOKEN_TO_BE_REPLACED

GOLD BULLION prices hit new 5-year lows against the US Dollar in London trade Wednesday, falling again through $1100 per ounce as world stock markets also dropped once more.
Crude oil fell below $50 per barrel, but major government bond prices rose, edging yields lower.
Gold priced in Sterling again dipped beneath £700 per ounce, a level last seen in February 2010.
"It was a volatile day for gold" during Asian trade Wednesday, says Swiss refining and finance group MKS, noting of the Shanghai Gold Exchange that "once again volumes were fairly sizeable at about 3.5 times what we were seeing last week."
"On my weekly chart I have $1045 then $975 as next big supports," says another trading desk.
Gold bullion needed to back shares in giant exchange-traded fund the SPDR Gold Trust (NYSEArca:GLD) shrank almost 20 tonnes in the week-ending Tuesday, the fastest drop since December 2013 and taking the ETF to its smallest size in 8 years at 689 tonnes.
A growing number of analysts and pundits noted Wednesday how current levels mark a 50% retracement of gold's 10-year gain from $250 to $1900 per ounce between 2001 and 2011. 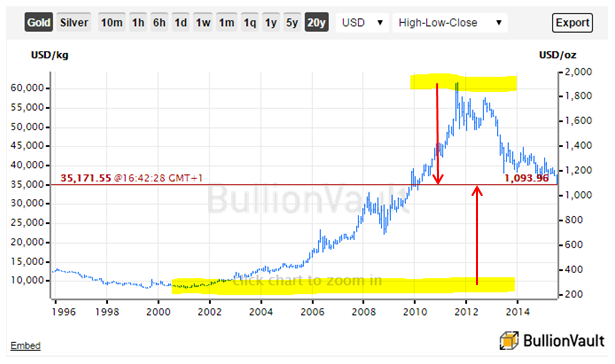 "Liquidation continues," says one London bullion bank's dealing desk, "with more selling seen [in Comex gold futures and options] and a lack of real buying coming from Asian players."
At the retail level, "Our sales are up by 20% to 30%," the Wall Street Journal quotes a manager at one of Hong Kong’s oldest gold jewelry stores.
But such physical purchases "will take time to filter through" to wholesale prices, notes one analyst, and while "we are due for consolidation, gold could retest the $1080-1045 area given the sour sentiment and general summer slumber" typical of key Asian markets in July and August.
"There hasn't been any rush to buy," Bloomberg quotes Mehul Choksi, chairman of India's biggest jewelry retailer, Gitanjali Gems Ltd. "People will wait 15 to 20 days to see how prices behave."
Most gold retailers in the key Middle Eastern center of Dubai "are not hedged" against falling bullion prices, says Rolf Schneebeli, CEO of advisory Gold Services, speaking to GulfNews.
"I can imagine that they are now not really eager to sell," he says, "[because] their current stock has been devalued."
Further up the supply chain, the "plunge" in gold bullion below $1100 already "puts approximately 10% of gold miners in loss-making territory," says a note from commercial intelligence consultants Wood Mackenzie, measuring mine costs on a "total cash cost plus sustaining capex" (TCPS) basis.
"The quest for production growth – especially in the latter portions of the bull market," says Ryan Cochrane – "meant that many gold miners developed increasingly marginal projects and paid excessive premiums.
After this "acquisition-driven production growth [was bought] through the extensive use of debt and highly dilutive equity financing," Cochrane goes on, "production may [now] begin to decline and higher prices will be required to justify the next round of large capital expenditures."
"There are a few mines that should close," specialist news-site Mineweb quotes equities analyst Kerry Smith at Haywood Securities, "but [mining] companies are always reluctant to do this as it incurs lots of costs and negative good will with the unions. So they subsidize them as long as they can.
"Gold would probably need to stay at these levels for another six months to stimulate shutdowns."
"General managers," agrees Chuck Jeannes, CEO of world No.1 miner by market cap, Goldcorp Inc (NYSE:GG), "are really good at keeping their mines alive.
"But the more you do that, the more you harm the long-term success of the asset."