END_OF_DOCUMENT_TOKEN_TO_BE_REPLACED

GOLD BULLION fell back through $1800 for the 2nd time this week in London on Wednesday, dipping to $1798 per ounce as world stock markets extended their rally from last week's drop together with industrial and energy commodities.
Bitcoin also rallied, leading a bounce in 'cryptocurrencies' with a 7.5% rise from yesterday's test of 6-month lows.
Tuesday saw the MSCI World index of developed-market stocks rise for the first time in 6 sessions, snapping its longest losing streak since the Covid Crisis first struck financial assets in February 2020.
Online storefront Amazon's stock (Nasdaq: AMZN) continued to rise pre-market in New York today following founder and ex-CEO Jeff Bezos' 10-minute tourist trip to near-space – a $25m flight "all paid for", he noted on his return, by Amazon's customers and staff – but remained 4.1% below its latest all-time record high of 2 weeks ago.
AMZN is currently priced at 85 times Amazon's record corporate earnings from 2020, with analyst forecast for 2021 putting it on a P/E ratio of 62.
The wider US stock market currently trades at 37 times earnings, itself 90% above the modern-era average. 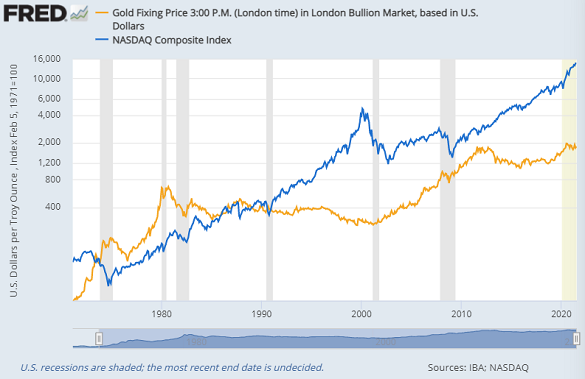 "Unless there are widespread lockdowns due to the spreading Delta [variant]," says a trading note from US investment bank Goldman Sachs, "commodities [will] rebound sharply.
"Even if there were widespread lockdowns, it [only] delays the rapid bounce back," the note claims, forecasting that gold prices will regain the $2000 per ounce level on each of a 3, 6 and 12-month horizon.
Having removed almost all UK restrictions on Monday despite the highest infection rates since New Year, the government of Boris Johnson may extend the demand for Covid passports to pubs and bars as well as nightclubs, where proof of vaccination becomes mandatory from the end of September.
France's President Macron – targeted by the Pegasus hack apparently used by other sovereign governments to spy on journalists and activists – has meantime "made several concessions" after pushing for vaccination to become mandatory, reducing fines for non-compliance with the remaining restrictions after 100,000 people joined 130 protests across the country last weekend and two vaccination centers were "ransacked".
"The bond market is reversing some of the hawkish plays in the face of resurgent virus variants," says bullion brokerage StoneX's Rhona O'Connell.
"Volumes have been high and Monday’s fall in yields was the largest since end-February."
But looking at the typically strong inverse correlation between longer-term interest rates and metal prices, the link between US bond yields and gold as well as copper is currently "tenuous" at best, she adds, despite the 10-year rate falling below its 200-day moving average around 1.25% per annum.
Neither the giant SPDR Gold Trust (NYSEArca: GLD) or its smaller competitor from iShares (NYSEArca: IAU) saw any change in size on Tuesday, holding both of those gold-backed exchange-traded funds at their smallest since mid-May.
The giant iShares' Silver Trust (NYSEArca: SLV) however saw net liquidation by shareholders erase half of Monday's growth, the strongest 1-day expansion since late-February.
Silver prices continued to struggle Wednesday in London, regaining 25 cents to recover the $25 level after setting a new 3-month low.
That pulled the Gold/Silver Ratio back from a new 6-month high of 72.9 hit in early Asian trade overnight.
US and European gold ETFs suffered net investor outflows of $8.5bn and $3.6bn respectively between January and June, the Financial Times reports, quoting data from ratings-agency Morningstar.
Asian-listed gold ETFs in contrast moved to "buck the trend and attract strong inflows" growing $1.6bn by value.