END_OF_DOCUMENT_TOKEN_TO_BE_REPLACED

GOLD BULLION slipped and then jumped versus all major currencies on Friday, heading for its highest weekly close in five despite further outflows from ETF investment funds as world stock markets also rallied on strong US economic numbers making a stark contrast with weaker data plus return of Covid restrictions elsewhere.
Priced in the Dollar gold bullion traded at $1823 per ounce ahead of Friday afternoon's London benchmarking auction, the highest weekend level since 11 June.
Retail sales in the world's largest economy jumped 1.3% last month from May when excluding sales of autos – still hampered by the shortage of microchips worldwide.
After China's first GDP estimate for April-June came in weaker than analysts forecast at 7.9% per year, yesterday's data also said the UK's jobless rate failed to fall from 4.8% on June's reading.
The Bank of Japan today cut its 2021 GDP forecast to 3.8% growth, down from the 4.0% projected in April.
But while US industrial output grew less quickly than expected on yesterday's figures, up 0.4% from May, US export prices still set a 2nd consecutive all-time high last month, rising 16.8% from the same time last year and second only to May's record annual rise of 17.5%.
Data from Google Trends says that US internet search volumes for the word "inflation" have fallen back since jumping in May to a new record on the tech company's 17-year series.
So-called "breakeven" inflation forecasts in the bond market also peaked that month. 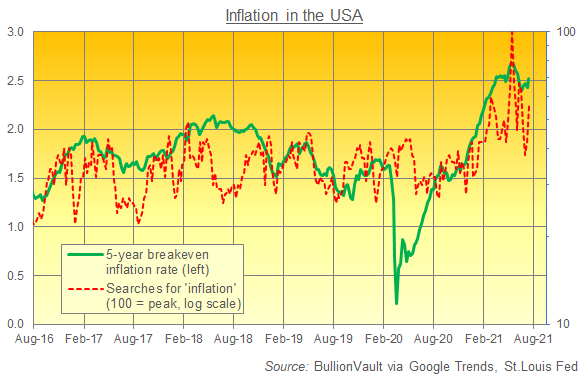 "The US has the highest inflation of the developed world," says analysis from Nicky Shiels, head of metals strategy at Swiss refiners and finance group MKS Pamp.
"Even if the Fed insinuates that CPI ex-food, ex-energy, (ex-goods, ex-restaurants, ex-rent, ex-lodging/restaurants, ex-travel, ex-services ex-anything) is 0%, the data speaks otherwise.
"Even excluding all 'transitory items', inflation is the worst in 3 decades."
Despite this week's inflationary US data, Thursday however saw the No.2 US gold-backed ETF – the IAU product – shrink for the first time since start-June, reducing to its smallest size since mid-May.
The larger GLD gold ETF meanwhile held on track for a 0.6% weekly outflow, its 4th decline in a row.
"We are seeing a lack of buying interest from ETF investors," says one bank analyst of gold bullion demand.
Chinese wholesale demand for gold bullion turned positive on Friday but only weakly, with the premium in Shanghai over London quotes moving up to $1.20 per ounce – barely 15% of the typical incentive for new imports to the metal's No.1 consumer nation.
India's consumer demand was meantime "slowly recovering after state governments eased lockdown restrictions, but [the] sudden rise in prices disrupted the recovery," Reuters quotes a wholesale dealer in Kolkata.
For the wider economy, "The outlook is highly uncertain as domestic and overseas economies could be swayed by developments regarding the pandemic," said the Japanese central bank today, holding its negative interest-rate and unlimited QE policies unchanged.