END_OF_DOCUMENT_TOKEN_TO_BE_REPLACED

GOLD BULLION slipped in price today, heading for the lowest Friday finish in US currency terms for 6 weeks in London as major government bond prices slipped back after this week's big rebound, edging longer-term borrowing costs higher, after US Fed chairman Jerome Powell said he will push ahead with steep interest-rate hikes to try curbing inflation despite recession becoming "certainly a possibility".
Large gold bullion bars traded in London – heart of the global wholesale market – slipped to $1825 per ounce as the Dollar rallied back towards last week's 20-year highs against the rest of the world's major currencies.
With benchmark US bond yields still 1/3rd of a percent below last week's 11-year high, global stock markets extended their rally from 18-month lows, rising for the first week in five.
"This week's stock gains stem from a shift to defensives rather than a full risk-on rally," says Bloomberg, pointing to an index of "megacap tech and healthcare names [reaching] an 18-month high relative to the MSCI World Index.
"Were it not for the fear of a global recession then gold would likely be lower than it already is," says Reuters, quoting a spread-betting bookmaker's analyst." 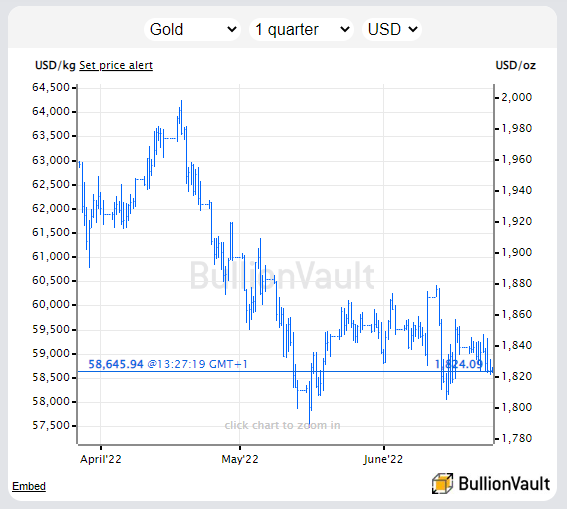 Thanks to Russia suspending supplies of gas to Germany meantime, "the whole market is in danger of collapsing at some point," said Germany's economic affairs minister yesterday, warning of a "Lehman Brothers" contagion amid what he called "a crisis" for Europe's energy security.
Germany's government bond prices edged back Friday after surging yesterday, driving 10-year borrowing costs down by more than half-a-per-cent from this week's new 2015 peaks near 2.00% per annum.
Natural gas prices in Western Europe slipped almost 1% on Friday, but held nearly 7-times higher from this point last June as Russia's invasion of Ukraine – now invited to become a member of the European Union, despite apparent misgivings from French President Macron – sees it hit with economic sanctions.
Crude oil meantime rallied but headed for its 2nd weekly price drop, trading at $110 per barrel of European benchmark Brent.
Gold bullion prices for Euro and UK investors today slipped to 2-week lows, trading below €1735 and £1490 per ounce respectively.
Silver meantime hit 6-week lows, trading back beneath $21 per ounce.
"You know what's worse than high inflation and low unemployment?" asked Democrat senator Elizabeth Warren of Jerome Powell this week as the Federal Reserve chief gave semi-annual testimony to lawmakers on monetary policy.
"It's high inflation and a recession with millions of people out of work. I hope you will reconsider that before you drive this economy off a cliff."
The mystery over Russian gold bullion imports to Switzerland – effectively banned by Western sanctions but spotted in the latest trade data by Bloomberg – meantime deepened further on Friday, as the Swiss Association of Manufacturers and Traders of Precious Metals (ASFCMP) denied that any refineries in its membership were responsible for April's 3-tonne inflow, and Swiss Customs officials said the metal actually came from the UK but with Russia highlighted as the original source of export.