END_OF_DOCUMENT_TOKEN_TO_BE_REPLACED

GOLD BULLION bounced from a new 4-week low against the surging US Dollar in London on Tuesday, holding firmer in terms of all other major currencies ahead of tomorrow's Federal Reserve decision as global stock markets fell for the 5th session running in the face of sudden fears over central banks "losing control" of long-term borrowing costs, now hitting their highest in over a decade.
The MSCI World Index extended yesterday's 3.7% plunge – the steepest 1-day loss since June 2020 – to hit its lowest since November 2020.
The price of gold in Euros, Sterling and Japanese Yen slipped only to what were new all-time highs in early March, when gold priced in Dollars challenged its 2020 Covid Crisis peak of $2075 per ounce amid Russia's invasion of Ukraine.
Dollar bullion prices today rallied $10 per ounce from $1811 hit in Asian trade overnight, the cheapest since mid-May.
The yield on 10-year US Treasury bonds – a benchmark for US government as well as many commercial borrowing rates – meantime ticked back 0.1 points from Monday's jump above 3.4% per annum, the most costly since April 2011, when Washington's triple-A bond rating was called into question due to the Fed's then-young policy of QE monetary stimulus.
So-called real rates, as tracked by the yield on 10-year inflation-protected Treasury bonds, in contrast rose today to 0.7% per annum – the highest since mid-March 2019. 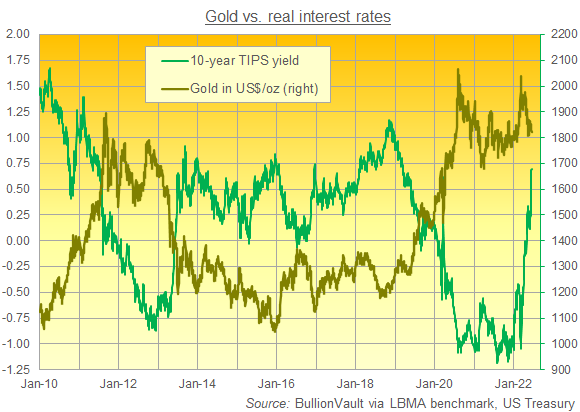 Rising by nearly 0.6 percentage points during the 1st two weeks of June, TIPS yields have only twice risen faster since TIPS were launched in 2003, first during the Lehmans' Crash phase of the global financial crisis in October 2008, and then during March 2020's Covid Crash across global financial markets.
Usually showing a statistically strong inverse correlation with TIPS yields, gold prices fell sharply both times, averaging 2-week losses of $78 per ounce during the Lehmans' phase and then $150 during the Covid Crash.
Gold prices today were trading $20 below the level of 31 May.

Tokyo's 10-year bond price rose in response, edging the government's borrowing cost lower but only by 2 basis points to 0.23% per annum after hitting New Year 2016 levels above 0.30% on Monday.
The BoJ's "unlimited" QE policy has a target of 0%.
"The bond market appears to be pricing in the chance of a collapse in yield-curve control," Reuters quotes Jun Ishii, strategist at brokerage Mitsubishi UFJ Morgan Stanley Securities, commenting on the weakening price of Japanese government bonds.
"We have a sizable short on JGBs," Bloomberg quotes Mark Dowding of $127bn asset managers BlueBay, calling the BoJ's policy "untenable".
Fresh falls in the price of Italy's government debt – the largest sovereign burden in the 19-nation Eurozone – meantime drove Rome's cost of borrowing further above 4% per annum on 10-year bonds, the highest since end-2013.
That took the spread between 10-year BTP and comparable German Bund yields above 2.5 percentage points, the widest since April 2020 – height of the 2020 Covid Crash – and a gap between the No.1 and No.3 Euro economies' state borrowing costs first seen during Rome's political and fiscal debt crisis of 2011. 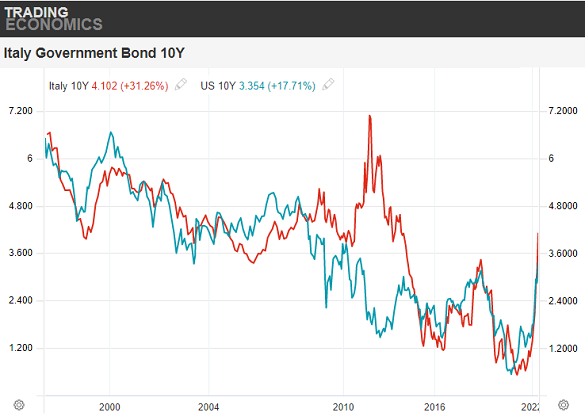 "The ECB needs a bazooka to close bond spreads," says an opinion article at Bloomberg, referring to the US Treasury's plea to the Federal Reserve during the subprime mortgage crisis and urging the currency union's central bank "to defend the Euro's weaker members from surging borrowing costs" by extending rather than suspending its QE money-creation and bond buying.
Gold bullion today slipped to €1740 per ounce for Euro investors, the cheapest since Friday's surge to 6-week highs following news of a fresh 4-decade high in US consumer-price inflation.
UK gold prices in Pounds per ounce held above £1500 per ounce as London's 10-year borrowing rates edged back from its highest since autumn 2014.