END_OF_DOCUMENT_TOKEN_TO_BE_REPLACED

GOLD BULLION held above yesterday's test of 12-week lows against a firm US Dollar in London trade Tuesday, costing $1860 per ounce as global stock markets bounced from their worst 1-day plunge since April Fool's Day 2020, depths of the initial Covid Crisis crash.
With the US Dollar hitting new 2-decade highs on Monday as longer-term interest rates set new multi-year highs, the MSCI World Index sank 3.3% yesterday to reach its lowest close since New Year 2021.
Global equity markets then regained over 1/3rd of that plunge today as longer-term interest rates eased back sharply in the bond market ahead of Wednesday's US consumer-price inflation data.
Setting a new 4-decade record of 8.5% for March, the year-on-year pace of CPI inflation will have slowed to 8.1% in April according to analysts' consensus forecasts.
US central bank the Federal Reserve last week hiked its key overnight interest rate by half-a-point for the first time in 2 decades, taking it up to 1.0% per annum.
"The Fed is now 6 weeks from its next meeting...leaving the real interest rate very negative," says a note for German bullion refiners Heraeus from analysts SFA Oxford.
"If inflation continues to be high keeping the Fed behind the curve, gold could resume its rally [but] the price will need to clear its April high of $2000 to suggest there is more to any rally than just a rebound from oversold levels."
Washington's 10-year borrowing costs today sank to 2.96% per annum, down almost 1/5th of a point from last week's new 3.5-year peak, set on the eve of the Fed disappointing some analysts and traders by not making a three-quarter-point hike to rates .
Inflation-protected TIPS yields also eased back Tuesday, retreating to 0.26% per annum after touching their highest level since March 2020's Covid Crisis.
That put the annual pace of inflation forecast by the bond market at 2.70% for the next decade, the slowest such reading in 9 weeks.
Gold prices were then trading almost $100 higher than today, while the conventional 10-year Treasury was offering less than 1.75% in yield. 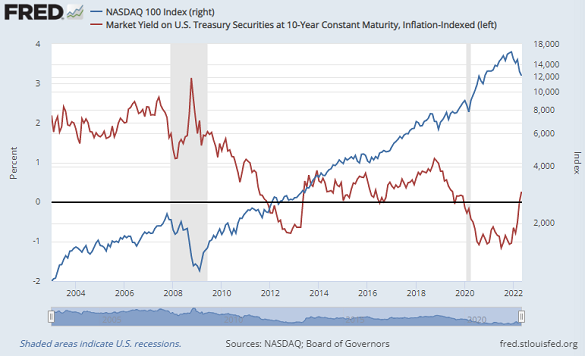 Often called the real 10-year rate, and typically showing a strongly negative correlation with gold prices, the yield on 10-year TIPS has still risen by more than 1.3 percentage points so far in 2022.
Outside of 2013's taper tantrum and the late-2008 Lehmans crisis, that's the steepest 17-week rise ever since those bonds were first issued in 2003.
Snapping its usual relationship with real rates, gold bullion priced in the Dollar has meanwhile risen 2.7% since New Year, and crude oil – despite a steep plunge Monday – has jumped by 33.4%.
The MSCI World Index of major equity markets has in contrast lost 17.1% as the EuroStoxx 600 index lost 13.5% and New York's tech-heavy Nasdaq 100 dropped 26.1% from the end of 2021.
Cathie Wood's ARK Innovation ETF (NYSEArca: ARKK) has meanwhile lost 57.7% while Tiger Club – "one of the world's biggest hedge funds and a big investor in high-growth, speculative companies" according to the Financial Times – has lost around $17bn in value, erasing in a little over 4 months "about two-thirds of its gains since its launch in 2001."
Natural gas prices on Tuesday slipped for a 3rd session running in Europe while the region's crude oil benchmark struggled to rally from Monday's 6.8% plunge to 1-week lows, retreating to what was an 8-year high when reached on news of Russia invading Ukraine in late-February.
France's President Macron was due to speak with Hungary's Prime Minister Orban today to find "a deal" for the European Union to agree a blanket ban on imports of Russian oil.
Russian missiles today again hit the port city of Odessa, while Germany's foreign minister Baerbock visited Bucha near Kyiv.
Copper prices also meantime rallied but held sharply below their recent highs, trading almost 15% below early March's record peak at the lowest since mid-December.
With Germany's 10-year Bund yield on Tuesday briefly dropping 1/5th of a percentage point from yesterday's fresh peak at late-2014 levels, gold bullion priced in the Euro on Tuesday held above yesterday's 5-week low of €1754 per ounce.
The UK gold price in Pounds per ounce held little changed from either 1 week or 1 month ago at £1506 as Sterling slipped yet again on the FX market despite the Bank of England also raising its key policy rate to 1.0% per year last week.