END_OF_DOCUMENT_TOKEN_TO_BE_REPLACED

GOLD BULLION prices sank $20 per ounce from yesterday's new 4-week highs above $1260 in London on Wednesday morning, erasing all of the week's previous 1.8% gain as world stock markets rose sharply following better-than-expected trade data from China.
The world's second-largest economy saw imports slow their decline to 7.6% per year while exports leapt 11.5% in March.
Gold then recovered $10 to $1250 per ounce, while  silver prices outperformed again as commodities rose after the news, beating yesterday's 6-month high against a falling Dollar to touch $16.29 per ounce.
China's only legal route for gold bullion inflows, the Shanghai Gold Exchange meantime confirmed it will launch a new contract on 19 April to set a "benchmark" price for gold bullion in the world's largest mining, importing, private consuming and central-bank buying nation.
Twelve banks (including two foreign institutions, Standard Chartered and ANZ) together with two miners, two jewelry producers and 1 refiner (MKS Pamp of Switzerland) will participate in the benchmarking auction.
Based on the century-old London Fixing model of finding the one price which clears the greatest volume of business, the new SGE benchmark will "concentrate" buy and sell orders together from across those participants.
The SGE will also stop publishing its current "gold spot reference price" on 19 April, the exchange said in Wednesday's flurry of announcements.
Gold priced in Yuan slipped 0.6% by Wednesday's close in Shanghai, but the incentive for new imports of bullion from London – heart of the world's wholesale storage and trading business since it developed in the mid-18th century – reversed yesterday's near $1 discount to stand at $1.20 per ounce, around half its typical level.
Legal gold bullion imports to India – the world's No.1 consumer nation until restrictions were re-imposed in 2013 – meantime fell 16% in the tax year-ending March 31, new data said today, dropping to 926 tonnes.
That was still equal to 26% of 2015's new record world gold mining output.
India's jewelry industry went back to work Wednesday, according to trade body the IBJA, after 42 days on strike over a new 1% sales tax which the government refuses to roll back.
"There is still a discount to world prices in India," notes global investment and bullion bank HSBC, "but the discount appears to be narrowing from the steep $25-40 per ounce level of just last week."
India, like China, bans the export of gold bullion, making it a "Hotel California" for imports in the words of one senior bullion bank executive, and also creating a 'gray market' in semi-manufactured objects.
"India coming back into the global market [to buy metal] may take up some slack from the apparent plateauing of [Western] ETF gold demand," says HSBC.
Holdings in the giant SPDR Gold Trust (NYSEArca:GLD) slipped a further 2 tonnes on Tuesday, now shrinking 1% from March's surge to end-2013 levels.
India's gold imports last month sank to just 18 tonnes, the same report claims, down more than 85% compared with March last year as world prices hit their highest monthly average in US Dollar terms since January 2015, jumping by 17% from December's fresh 6-year low.
Solid interest at Wednesday morning's London benchmarking auction meantime found a price of $1245.75 per ounce.
Moved to an independent, electronic platform last March – and now with 12 participant banks, including China's largest bank ICBC – the twice-daily London benchmarking saw an average 3.3 tonnes of gold bullion change hands at the key afternoon auction in March, the highest level since December's 3.6 tonnes.
The new process "has...more than doubled morning and afternoon gold auction volumes compared with the five months prior" to March 2015, administrator ICE's specialist benchmarking division said Monday.
Including all cleared trade through London, the market's core bullion banks traded an average 555 tonnes of gold each day between them in 2015, down almost one-fifth from the recent peak of 2013. 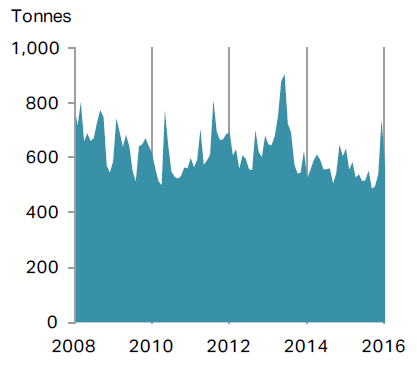 The SGE's main T+D contract turned over less than one-tenth as much on a daily basis last year, according to data compiled by specialist analysts Metals Focus.
Shanghai's new gold "fixing" will be overseen by a governance committee including attendees from the government-approved China Gold Association and from mining-industry backed market development group the World Gold Council.
The World Gold Council also has a representative on the oversight committee for the LBMA Gold Price benchmark in London, together with two other attendees from the mining industry plus one each from refining, vault operators, bullion banks and Indian financial intermediary Kotak Mahindra Bank.
The SGE also said Wednesday it will carry out a "comprehensive" reform of its VAT sales tax rules starting 1 May, to ensure "the scope" and "full integration" of businesses from the construction, real estate, financial services and consumer services sectors.
SGE gold delivery receipts give permission for a VAT rebate, leading to a wide-spread scam whereby the receipts are sold to unrelated companies and which state television reported in December had enabled potentially $900 million-worth of tax evasion through one company alone.
"The company got the invoices for gold VAT [exemptions] from the Shanghai Gold Exchange and offered them to other companies," the South China Morning Post quoted an official appearing in the CCTV report, adding that the company – Longhaitong – sold the receipts for a 6% fee of their value.