END_OF_DOCUMENT_TOKEN_TO_BE_REPLACED

GOLD BULLION fell to 2-week lows against a rising US Dollar Tuesday morning, trading more than 7.5% below early March's near-record peak as Ukraine-Russia peace talks continued in Turkey and longer-term interest rates continued to rise worldwide.
Global stock markets rose again, with China recovering a little of Monday's steep Shanghai-lockdown losses after the MSCI World Index added 0.4% overnight to reach a 14-week high.
Priced in the Dollar, gold bullion fell to $1909 per ounce but Euro and British Pound gold prices slipped only to 1-week lows, down 8.6% and 7.5% respectively from their new all-time highs of 8th March.
The Euro gold price fell near €1735 while the UK gold price in Pounds per ounce dipped below £1463.
Betting on the Fed's next policy decision now sees a 72% chance it will hike by half-a-point – the first such move since 2000 – at its May 4th meeting.
Rates will then end 2022 at 2.50% or above according to 3-in-4 bets on CME interest-rate futures for December. 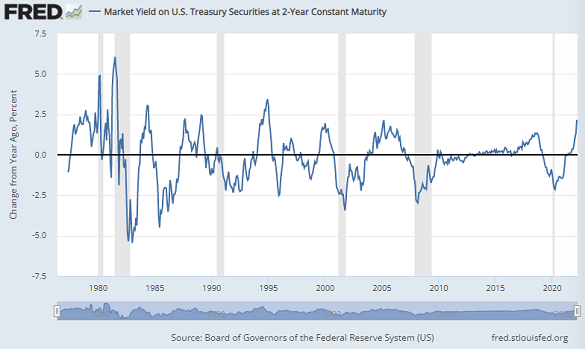 With gold bullion paying no interest, falling bond prices have now pushed up the yield offered by 2-year Treasury debt to 2.35% per annum, the highest since April 2019 and more than 2.2 percentage points higher from this time a year ago.
That's the steepest 12-month hike in 2-year yields since spring 2005, eve of the US subprime mortgage collapse.
Crude oil meantime rallied back above $113 per barrel of Brent, a 6.5-year high when first reached in early March, while European natural gas today rose almost 10% in price, trading at the 5 times the cost of this time last year.
"The shock from energy prices this year will be larger than any single year in the 1970s," said Bank of England governor Andrew Bailey on Monday.
The UK central bank now forecasts inflation of 10% by year-end, and the government's own forecasters predicting a sharp slowdown in real GDP growth as a result.
Warning that rising costs are already denting economic output, "I'm afraid the cost of doing business will reflect a huge change in risk and volatility in [energy] markets," Bailey went on,
On the political front, the Kremlin today called claims that Russian oligarch Roman Abramovich had been poisoned while attending peace talks with Ukraine " part of the [Western] information war" against the natural-resources giant.
The Putin government also today dropped its peace-talk demand for "de-nazification" of its western neighbor.