END_OF_DOCUMENT_TOKEN_TO_BE_REPLACED

GOLD BULLION rose again Thursday, reaching 1-week high above $1950 per ounce as crude oil edged back from yesterday's 5% rise ahead of US President Biden attending meetings of the Nato military alliance, the G7 group of Western economies, and also the European Union to discuss further sanctions against Russia and more support for Ukraine.

European bourses gave back earlier gains as Hong Kong and Chinese share indexes closed the day lower, led by fresh losses in tech stocks such as Tencent and Alibaba.

Gold bullion landed in China – the metal's No.1 consumer market – edged higher to ¥398 per gram but its premium over quotes in London, heart of the global bullion market, slipped to $1.70 per ounce, less than 1/4 of the typical incentive for new imports. 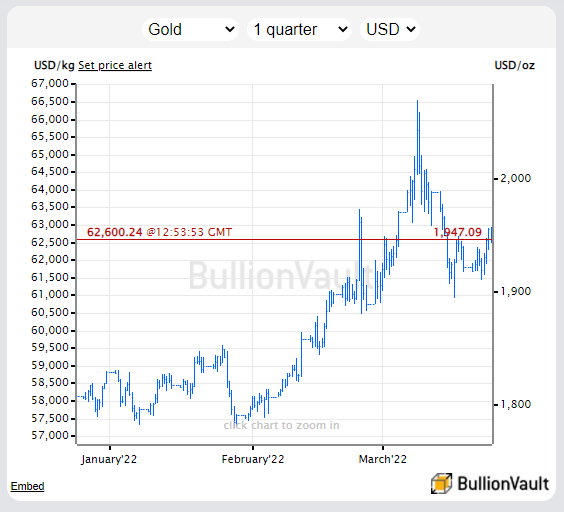 "Gold is under some pressure with bond yields rising rapidly," says a trading note from Swiss bullion refining and finance group MKS Pamp, "but safe haven demand is ensuring the metal remains above $1900."

"Further sanctions [following today's Nato, G7 and EU summits] could fuel the inflation expectations of market participants," reckon analysts at German financial services group Commerzbank, "which would benefit gold in its role as a store of value."

Inflows to gold-backed ETF trust funds worldwide have already totalled 33 tonnes this week, Commerzbank says, taking March's ETF demand to the equivalent of 150 tonnes – "one of the most robust ever."

Across all of July 2020, just before gold priced in Dollars hit its current all-time high at $2075 per ounce, the GLD added 63 tonnes.

"The ongoing high safety needs of market participants are probably behind the buying interest," says Commerzbank, "as the war in Ukraine is continuing unabated."

Interest rates offered to investors by major Western government bonds rebounded Thursday from yesterday's drop, putting 10-year US Treasury yields back at the highest since spring 2019 at 2.38% per annum.

Inflation-protected yields meantime held steady at minus 0.61% on 10-year TIPS, implying a bond-market forecast that inflation will average 2.99% per annum across the next decade, the highest such 'breakeven rate' since those instruments were launched in 2003.

Annual inflation in the USA last month reached 7.9% on the headline Consumer Price Index, the fastest rise in the cost of living since the deep recession of 1982.

"We've got to tighten the economic vice around Putin," said UK Prime Minister Johnson – whose ruling Conservative Party is widely accused of encouraging and welcoming suspect Russian money into London's financial and political systems – "sanctioning more people [and] looking at what we can do to stop Putin using his gold reserves."

US crude oil stockpiles fell by 2.5 million barrels in the week ending Monday, the Energy Information Administration said yesterday, as a rise in demand more than offset the 4.2 million barrels released from the government's Strategic Petroleum Reserves.

While Eurozone consumer confidence is sinking on the latest survey, business activity across the 19-nation currency union is growing more strongly than analysts expected on March's preliminary Markit PMI surveys.