END_OF_DOCUMENT_TOKEN_TO_BE_REPLACED

GOLD BULLION fell sharply again on Tuesday, dropping to 2-week lows at $1908 per ounce as Western stock markets rallied and oil prices sank amid fresh forecasts for a global economic slowdown as politicians from Russia and Ukraine met for ceasefire talks.
A solid rise in New York equities saw Western European bourses erase earlier steep losses after the MSCI World Index ended last night with its 33rd loss in 51 sessions so far in 2022.
European benchmark Brent crude meantime lost over 6% today, dropping back to $98 per barrel – nearly 1/3rd below last week's 14-year highs – as analysts warned of high prices hitting demand as US shale output jumps.
Like oil, wholesale gold bullion traded in London's wholesale market also fell Tuesday to hit levels seen on the eve of Putin's invasion of Ukraine, losing over 7% from last Tuesday's spike to new or near all-time highs in all major currencies.
Longer-term borrowing costs meantime eased back from yesterday's spike in the bond market ahead of Wednesday's widely-expected quarter-point "liftoff" from zero in the US Federal Reserve's key interest rate.
"The market seems to be belatedly waking up to the implications of a hawkish FOMC meeting this week," Reuters quotes one spread-betting bookmaker, "and the rise in US yields will not help gold's cause."
With longer-term bond yields jumping on Monday, 10-year TIPS yields – reflecting market forecasts for inflation-adjusted interest rates – yesterday rose by 0.15 percentage points, the fastest 1-day jump since February last year.
Gold tends to show a strongly negative correlation with TIPS yields, typically reading -0.62 across the last 5 years on a rolling 1-month basis.
That figure would read +1.00 if gold and real rates moved together in lockstep, or -1.00 if they were perfectly inverse.
Yesterday that correlation reached its strongest negative reading since late October at -0.87, a level last beaten in August 2020 – peak of the Covid Crisis surge in gold prices – at -0.95 and below. 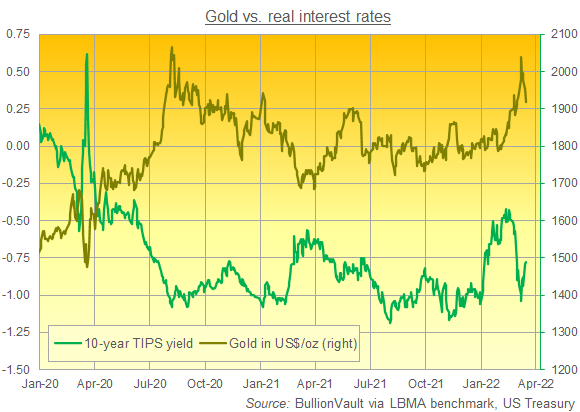 "A continued push lower in real yields is not [our] base case," says an updated macro-market analysis from US investment bank J.P.Morgan's research department.
"[But] additional boosted 'safe haven' / inflation hedging demand for precious metals on the back of a continued melt-up in other commodities, particularly energy, could likely send gold prices up towards $2200."
As it is, "There's lesser need for safe havens at the moment," the newswire also quotes a futures broker, "given peace talks in Ukraine, the upcoming Federal Reserve rate hike and some pullback in commodity prices."
Monday's steep drop in gold prices left the giant SPDR Gold Trust (NYSEArca: GLD) unchanged in size, while the smaller iShares gold-backed ETF investment product (NYSEArca: IAU) expanded for the 3rd session running to reach its largest in over 12 months.
Silver's largest ETF product, the iShares trust (NYSEArca: SLV) also expanded by 0.4% to reach its largest size in 4 sessions as silver bullion headed below
Silver prices then fell again to $24.54 in London bullion trade today, down almost 9% from last Tuesday's 9-month high.
"The conflict in Eastern Europe has added more downside risk to the performance of the world economy in 2022," says the latest monthly report from the Opec cartel of oil-producing nations.
"So far, and in addition to the ongoing pandemic...rising commodity prices are further escalating global inflation. The effects of the conflict, if sustained, will lead to a decline in consumption."
Following this month's surge in crude prices, US shale oil production "is set for the biggest rise since March of 2020," says OilPrice.com, citing EIA drilling rig data.
UK Prime Minister Johnson is rumored to be visiting 'swing' oil producer Saudi Arabia today despite international condemnation of the Kingdom executing 81 people, including anti-government protesters and other political prisoners, at the weekend.
US President Biden may visit Riyadh in May, news-site Axios claims, despite calling the current Saudi leader "a pariah" during his 2020 White House campaign.
Saudi Arabia has already invited China's President Xi for a formal state visit that month, reports the Wall Street Journal.
With the civilian death-toll from Russia's invasion of Ukraine now put at 691 by the United Nations – including 48 children – Moscow's foreign secretary Lavrov, now subject to personal sanctions by the US, EU and their allies, said Tuesday that a revival of the 2015 Iran nuclear deal is looking increasingly likely, enabling the Islamic Republic to sell crude oil to global markets again following guarantees from Washington that Western sanctions over Ukraine won't interfere with the program.
The US Dollar today eased back once more on the FX market, retreating 0.6% from this month's 3.5-year high.
That accelerated the drop in gold bullion prices in Euro terms, now almost 9% off last Tuesday's fresh record above €1900 per ounce at €1740.
The UK gold price in Pounds per ounce meantime traded over £100 below its new all-time high, dropping to 8-session lows of £1460.