END_OF_DOCUMENT_TOKEN_TO_BE_REPLACED

GOLD BULLION fell near 2-week lows for US investors overnight Tuesday, hitting $1226 per ounce in Asian trade before rallying $10 as world stock markets fell with commodities following a "no change" decision on negative rates and QE from the Bank of Japan ahead of this week's US Federal Reserve meeting.
Major government bond prices rose, pushing 10-year US Treasury yields down 6 basis-points from Monday's 7-week highs near 2.00%.
US crude oil contracts dropped another 2%, falling to 2-week lows of $36 per barrel but holding almost 40% above last month's new 12-year lows.
Iron ore meantime fell further from last Monday's sudden 19% spike – a move "caused by speculation" in China's Dalian market, according to analysts and brokers speaking to the AFP news agency today.
"While there are grounds to believe [commodity] markets may have bottomed," said a note Monday from UK bank Barclays, "the scale of recent price gains looks overdone...[moving] ahead too far, too fast over the past few weeks."
"The possibility of achieving cycle lows needs to be flagged," says new technical analysis of commodity markets from French investment and bullion bank Societe Generale, "particularly in oil and gold...[which could] pave the way for a multi-year recovery going forward.
"Gold has witnessed a sustained rally and, for the first time in years, is on the verge of breaking above the downward channel since 2013."
Monday's sharpest 1-day drop in gold bullion since mid-February saw shareholders liquidate positions in the giant SPDR Gold Trust (NYSEArca:GLD) at the fastest pace for a month.
Shrinking by 5.5% as the gold price dropped 1.8%, the GLD ended Monday needing 790 tonnes of bullion to back its stock-market value – the largest quantity in 1.5 years when first reached at the start of March. 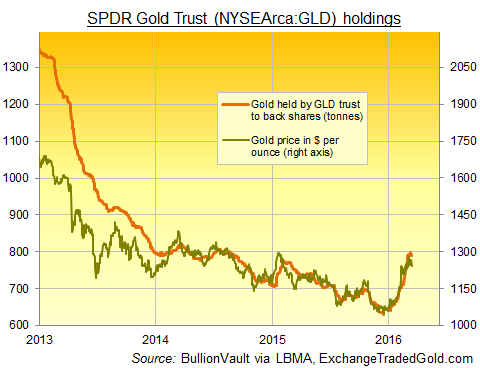 "Recent strong US data could keep the Fed from sounding dovish," says a note from Swiss investment and bullion bank UBS, "and this could weigh further on gold...creat[ing] better opportunities for investors who have been sitting on the sidelines to build gold exposure."
New data Tuesday showed US retail sales falling less than expected in February, but factory prices flatlined from a year earlier, weaker than expected.
The most bullish forecaster in this year's LBMA survey of professional analysts, "We expect the downside to be ultimately contained," says UBS, because "[bullish] longs have more endurance" than previously, and it also expects "indications of lurking interest to buy dips."
"We have increased our [average] gold forecast by about 5% in 2016" to $1199, said a new note Monday from Australia-based financial services group Macquarie, repeating its "bullish medium-term outlook but remain[ing] cautious short-term given our expectation that the Fed will raise rates multiple times this year."
While few traders or analysts expect any change from the Fed in Wednesday's statement or press conference, betting in the futures market now sees the odds of its interest-rate ceiling staying unchanged at 0.5% by June at just 1-in-2.