END_OF_DOCUMENT_TOKEN_TO_BE_REPLACED

GOLD BULLION fell hard on Wednesday in London, dropping $50 per ounce from yesterday's afternoon benchmark price – the highest since August 2020's record highs – as global stock markets rallied, commodities prices retreated and longer-term interest rates rose amid a brief ceasefire between Russia and Ukraine to allow civilians to flee towns and cities worst-hit by Moscow's invasion.
President Putin yesterday hit back at new US sanctions banning the import of any Russian oil products by banning an as-yet un-named list of commodities being exported from oil, gas and metals-rich Russia.
With his "special operations" in Ukraine continuing to meet both military set-backs and mass civilian protests, Putin's March 8 decree imposes these "special economic measures" until 31 December 2022.
Analysts at Fitch last night cut its view of Russia's foreign-currency debt from 'B' to 'C' – below the 'CCC' level where the ratings agency usually stops tracking any government bonds and signalling "that a sovereign default is imminent."
Fitch had as recently as December confirmed Russia's sovereign debt as "investment-grade" and "stable" at 'BBB' after upgrading it to that level in August 2019.
"Russia's foreign sovereign bonds are at the equivalent of $39.5bn," notes bullion-market specialist Rhona O'Connell at brokers StoneX. "So in theory [Moscow has] easily enough gold to stave off default.
"[But] in practice, even if Russia were minded [or able] to sell, which is very doubtful," O'Connell says, the sheer quantity involved "knocks the idea out of the water", with a price of $2000 per ounce needing 614 tonnes sold to cover Moscow's debt.
That would equal 16% of global mining output and pretty much match all of the entire world's 50-year central-bank record demand of 2019. 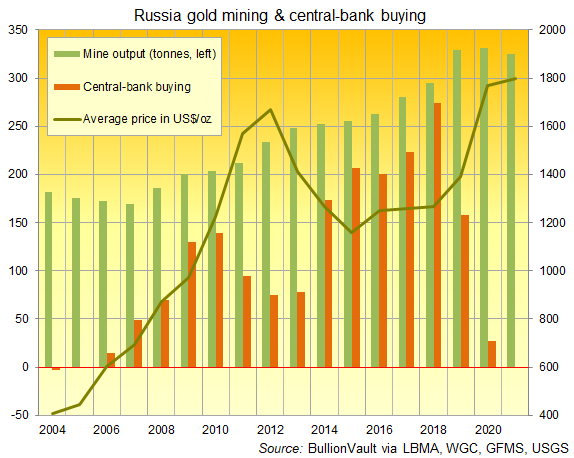 What's more, O'Connell adds, the Central Bank of Russia is now "planning to buy" domestically-mined gold, not sell it, in repeating the industry-support and FX reserves-growth achieved during the US-EU sanctions over Moscow's 2014 invasion and annexation of Crimea.
With gold bullion sinking to $1990 per ounce in London today – erasing most of this week's earlier surge – prices Shanghai had earlier fixed today at ¥415 per gram, the highest benchmark price in China, gold's No.1 consumer market, since mid-September 2020.
But that peak still saw gold landed in Shanghai sink to a discount versus London quotes, trading $6.50 below prices in the bullion market's central hub and dis-incentivizing new imports to China for the first time since November 2021.
Gold prices in India – the metal's No.2 consumer market – also  "saw a sharp fall" says LiveMint after rising above ₹55,000 per 10 grams in early trade Wednesday "as risk sentiment improved."
Any pullback will likely be welcomed by India's jewelry industry, says the Economic Times, hit by people "cancelling their orders or postponing purchases they had planned for the marriage months of April and May" due to the gold price surging within 2% of summer 2020's record Rupee high.
India's jewelry sector – which imports, cuts and polishes 80% of the world's rough diamonds according to Crisil Ratings, the local division of S&P – also faces problems from US-EU sanctions hitting supplies from Russia, source of almost 1/3rd of rough output globally.
Yesterday's price spike in silver near $27 per ounce – the most expensive since New Year 2021's #silversqueeze phenomenon – saw iShares' Silver Trust (NYSEArca: SLV) grow by 0.4%, its first expansion in over 2 weeks.
But while the giant SPDR Gold Trust (NYSEArca: GLD) also expanded by 0.4%, growing for the 3rd session running to take its shares in issue to the largest since March 2021, the world's next largest gold ETF – the iShares' Gold product (NYSEArca: IAU) – was unchanged for the 3rd session running, holding at its largest size since start July.