END_OF_DOCUMENT_TOKEN_TO_BE_REPLACED

GOLD BULLION erased yesterday's $30 spike in London trade Tuesday as global stock markets rallied and interest rates rebounded in the bond market after Russia's defense ministry said it's set to withdraw "some" troops from neighboring ally Belarus' border with Ukraine.
"As the forces complete their military exercises," said Moscow's defense spokesman, "they will, as always, complete a multimodal march back to their permanent bases."
With Germany's new Chancellor Olaf Scholz calling his nation's "very good economic relations" with Russia "something special" ahead of meeting Vladimir Putin in Moscow to discuss Ukraine, wholesale gold bullion bars fell back below $1850 per ounce after hitting their highest Dollar price since June last year.
"[But] so far we have not seen any de-escalation on the ground," said the Western allies' Nato Secretary General Jens Stoltenberg at a press conference in Brussels, "no signs of a reduced Russian military presence on the borders with Ukraine."
Gold priced in Euros meantime sank €30 per ounce after holding around €1660 overnight – its highest level since September 2020, just 2 months after the precious metal set its current all-time record highs in terms of all major currencies – following comments from Ukraine's President Zelensky that a Russian invasion would start Wednesday. 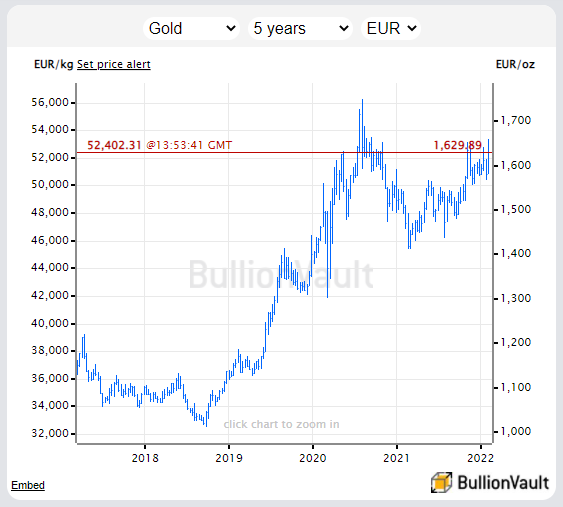 Global stock markets rallied on Tuesday's troop withdrawal comments from Russia, with Moscow's RTS up 5.0% – and the Ruble rebounding 1.3% on the FX market – as the EuroStoxx 600 index regained 1.7% after losing 5.0% over the last month.
Longer-term interest rates also rebounded, with Washington's 10-year borrowing costs recovering last week's 31-month high of 2.03% and Germany's 10-year Bund yield hitting a new 3-year high above 0.3% per annum.
"We're in the relief phase, I guess, from the Russia-Ukraine headlines," Reuters quotes an interest-rate strategist at Japanese finance group Mizuho, "but I still think some people will be cautious about further developments."
"A de-escalation of tensions reduces the need to hold safe haven assets," Bloomberg quotes commodity analyst Giovanni Staunovo at Swiss bank and London bullion market-maker UBS.
"[But] there were other factors supporting gold recently, which are still around."
German magazine Spiegel said at the weekend that the CIA had told Washington's European allies, as well as Ukraine's Zelensky, to expect an attack tomorrow.
Former comedian and satirist Zelensky then repeated this date overnight in what his media team scrambled to call a joke as European energy prices jumped and US stock markets sank.
With petrol and diesel prices already at record highs for UK and German motorists, Brent crude oil peaked above $96 per barrel, a fresh 7-year high, before retreating nearly $3 by lunchtime in London.
Dutch gas futures then sank by nearly 10% on Tuesday for March, April and May, helping wholesale UK electricity prices drop by 1/10th to the lowest in 10 days.
Including bonuses, UK wages rose 4.3% across 2021, the ONS said Tuesday, slower than 2020's 4.6% pay rise.
Annual inflation in the costs of living reached 4.8% in December. Large bullion-bar gold prices in the UK Pound per ounce today erased Monday's 1.4% spike to 3-month highs near £1390.
Inflation in the 19-nation Eurozone – whose GDP expanded by 4.6% per year at the end of 2021, according to new data today – ran at a currency-union record of 5.1% in January, but the cost of living in Spain slowed to 6.1% annual increases from December's new 3-decade high of 6.5%, the official INE data agency said Tuesday.
"Since World War I, the 'collective West' has been building a 'sanitary cordon' around Russia," says the independent Moscow Times, reporting what state-run Rossia 1's weekly Vesti Nedeli news show is telling its viewers, "trying to separate it from the outside world by controlling Russia's neighboring states."
Russia's lower house of parliament, the Duma today voted to demand President Vladimir Putin recognize Ukraine's "breakaway" provinces of Donetsk and Luhansk as Russian territory, violating the 2014 Minsk Agreement on the Peace of Eastern Ukraine.