END_OF_DOCUMENT_TOKEN_TO_BE_REPLACED

GOLD BULLION retreated 2.5% from yesterday's sudden 12-month highs above $1260 per ounce in Asia and London on Friday, curbing its strongest weekly surge since December 2008 as European stock markets rallied from their worst-ever start to a year.
"The extraordinary run up in gold prices over the last few days," says bullion analyst Jonathan Butler at Japanese conglomerate Mitsubishi, "has been largely the result of a resurgent fear trade as central banks around the world consider negative interest rates in response to persistently low inflation."
Joined last year in applying negative rates by the European Central Bank, and last month by the Bank of Japan, the Swedish Riksbank yesterday imposed a heavier negative interest rate policy of minus 0.5% on deposits from commercial banks.
Federal Reserve chair Janet Yellen told lawmakers Wednesday she wasn't sure negative rates would be legal for the US central bank. But she refused Thursday to rule out using NIRP in her second day of semi-annual testimony.
"Negative interest rates," says Butler at Mitsubishi, "effectively remove the opportunity cost of holding gold [as a non-yielding asset] and bullion becomes a hedge against falling bond yields...when countries pursue unconventional stimulus policies."
"Strong bullish momentum in gold and silver prices," said a new note Thursday from Dutch bank ABN Amro's analyst Georgette Boele, "[mean] we have been clearly wrong on the outlook...because of our call of US Dollar strength, higher US Treasury yields, and an improvement in sentiment."
The Dollar rallied on Friday to push the Euro back 1 cent from yesterday's new 4-month high, while 10-year US Treasury bond prices retreated, driving yields higher from this week's near-4-year lows.
Japan's Nikkei stock index fell for the 7th of 9 sessions in February so far – closing more than one-fifth down for 2016 to date at its lowest level since October 2014 – but European equities ralled from their new 18-month lows, led by a 17% jump in Commerzbank after the German financial giant issued better-than-expected quarterly earnings.
Major gold miners including Barrick (NYSE:ABX) are due to report their quarterly earnings next week.
Crude oil meantime bounced almost 7% Friday from yesterday's new 14-year lows. Silver retreated with gold bullion, dropping back from Thursday's 4-month high of $15.95 per ounce but holding 4.7% gains for the week.
"Amid the chaos," says Albert Edwards, strategist at French investment bank Societe Generale, "the most significant market mover since the start of the year has been the collapse in US inflation expectations – to below the level for the Eurozone!" 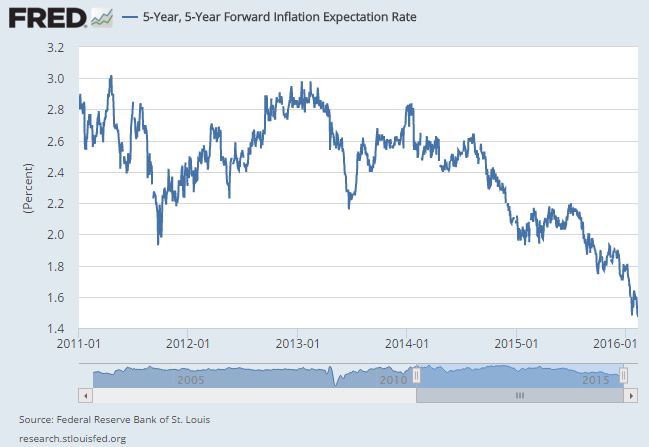 "Banks were not the problem" during Japan's post-bubble 'lost decade' of the 1990s, Edwards goes on.
"Banks were a symptom of a problem and that problem was deflation...largely attributable to the surge in the Yen in the previous few years – a surge of exactly the same order of magnitude as that seen in the US Dollar over the past few years."
"At a minimum," says US fund management giant Pimco's chief of US strategies Scott Mather, " NIRP is a contributing factor to the financial market volatility of the past few months.
"Contrary to current central bank dogma, NIRP is [also] possibly one of the major catalysts behind the tightening in global financial conditions," Pimco's Mather goes on, "[thanks to] widening of credit and equity risk premiums, increased volatility and reduced credit availability from a more stressed bank system."