END_OF_DOCUMENT_TOKEN_TO_BE_REPLACED

GOLD BULLION slipped below $1100 per ounce in London on Monday afternoon, but held onto most of last week's 3.7% gain after China's stockmarket fell hard for the third day already this year while Western equities crept higher.
Crude oil hit new 11-year lows as US Treasury bond prices retreated, nudging 10-year yields up to 2.16% from Friday's new 2-month low.
Silver held above $14 per ounce, extending Friday's small 0.6% rise for the first week of the New Year.
Platinum meantime fell to $850 per ounce in spot bullion trade, giving its widest-ever Dollar discount to gold prices.
Finishing Friday with its highest weekly close in ten, gold put in what analysts today called "a good performance" and "a very impressive advance" despite a strong reading on new US jobs hiring for December, well ahead of Wall Street forecasts.
"The fact that [non-farm payrolls] were so strong made [gold's] resilience even more impressive," says a note from David Govett at London brokers Marex Spectron.
After gold's strongest weekly gain since August, "I think we can see higher numbers over the coming week," says Govett – formerly bearish to neutral on gold's near-term direction – "and would continue to look to buy dips for the time being."
"Money managers also appear to be jumping on the bandwagon," says one major bank's commodities desk, with "options trading...clearly showing a skew towards upside" in gold bullion prices, according to another.
The picture for physical demand in Asia is "mixed" says Tom Kendall, analyst at the Chinese-owned ICBC Standard Bank – now rumored to be buying ex-bullion market maker Deutsche Bank's London vault for "way lower" than the $4 million initially asked – pointing to Indian jewelers offering $3 per ounce discounts to reduce their stockpiles, plus a 23% year-on-year drop in sales by world No.1 jewelry retailer Chow Tai Fook in China and Hong Kong.
But against that, Kendall goes on, speculative traders in US Comex gold derivatives continue to hold an "elevated" bearish position, meaning there's scope both for short-covering and new bullish betting.
"On balance I still favour a move higher towards the $1140 area between now and Chinese New Year [on Mon 8 Feb] but slowing physical demand, if it persists, could derail that." 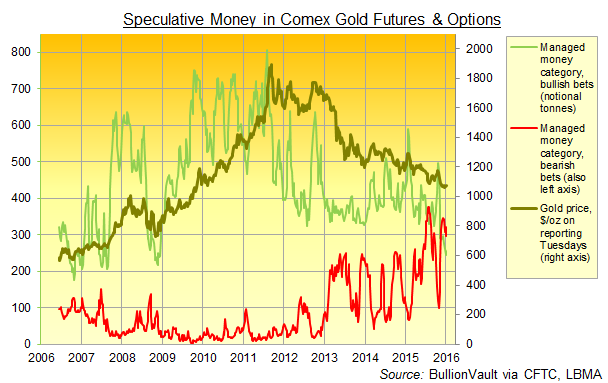 "There is room for [bullish] positions to be re-established," says the precious metals team at Swiss investment and London bullion bank UBS, noting that speculators' total bullish gold betting sat at "only 48% of the all-time high" on the latest data, "about 17% below the 12-month average."
Net of bearish bets, UBS goes on, "gold positioning remains very light at 7% of the record."
With the Shanghai stock market losing over 5% on Monday, gold bullion opened Asian trade at $1108 per ounce – its highest start to the week since 2 November – before slipping to $1097 in late London dealing.