END_OF_DOCUMENT_TOKEN_TO_BE_REPLACED

GOLD BARS traded in London's wholesale bullion market leapt in price on Thursday, extending a rally following yesterday's expected US Fed tapering news by rising near $1800 for the first time in a week after the Bank of England failed to raise UK interest rates as previously signalled.
With gold bullion bars rising to $1798 today – over $30 per ounce from yesterday's near 3-week lows – global stock markets also extended yesterday's rise in US equities following the Federal Reserve's clearly signalled move.
Euro prices for large gold bars today tested 5-month highs above €1556 per ounce, while gold priced in Sterling jumped as the Pound sank to 1-month lows on the FX market, breaking towards its highest since mid-July at £1329 per ounce to show a gain of 2.8% for the week so far.
Today's failure to act from the Bank of England came 2 weeks after governor Andrew Bailey declared that "[while] monetary policy cannot solve supply-side problems...it will have to act and must do so" in the face of rising inflation.
"At this meeting," say today's meeting minutes, "the Committee concluded that the existing stance of monetary policy remained appropriate," with the Bank's latest economic forecasts predicting UK inflation will hit 5% in early 2022. 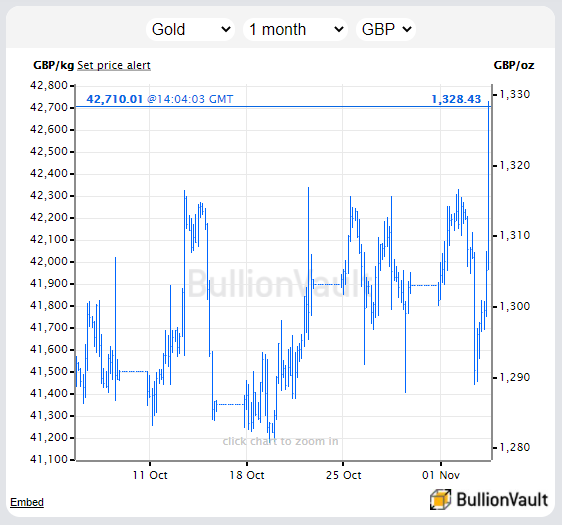 The 3rd Western central bank to announce its latest policy stance this week, the Bank of England kept its overnight interest rate at 0.1% per annum, defying market forecasts of a hike to 0.25%.
That came after the Reserve Bank of Australia on Tuesday ended its 'yield curve control' program as expected but vowed not to raise interest rates until 2023 at the earliest, denting the Aussie Dollar on the currency markets.
The US Federal Reserve then laid out its long-trailed QE tapering plan Wednesday, but chair Jerome Powell refused "to even countenance a discussion of when rates should go up" in his post-decision press conference as the Financial Times puts it.
Eurozone central-bank chief Christine Lagarde also said Wednesday that the European Central Bank is "very unlikely" to raise its rate from minus 0.5% next year, because inflation looks "subdued" long term, despite running at 3-decade highs in Germany.
Following the Bank of England news, government bond prices rose across rich-world Western markets, driving 10-year borrowing costs down to the lowest in a month for Germany and the lowest in a week for both the UK and US.
The price of inflation-protected debt rose faster, driving 10-year US TIPS yields down to 1-week lows of minus 1.03% per annum.
That was a new series low for 10-year real rates when Dollar gold prices set their current all-time highs abovev $2000 per ounce in August last year.
Fully 10 basis points below Wednesday's rate, today's move marks the steepest drop in 10-year TIPS yields since late-February.
Betting on the odds of a March rate rise has now fallen back below 16% from 22% a week ago, and more traders now think the Fed will stay on hold beyond June as well, with the CME's FedWatch tool pointing to odds of 42% up from 35% last Thursday.
Driven by a surge in consumption and raw material costs, the US trade deficit in goods and services yawned to a fresh all-time record in September, new figures showed Thursday, swelling 29.2% from 12 months before to reach almost $81 billion.
Lay-offs by US corporations then reached almost 23,000 in October according to today's Challenger Job Cuts report, the most since April but just half the 5-year monthly average before the Covid pandemic began.
Last week's data meantime showed continuing claims for US jobless benefits held higher than analysts expected, but new jobless claims were lower.
Tomorrow brings the closely-watched Non-Farm Payrolls report, expected to show 425,000 net jobs growth for October on consensus forecasts.
The strongest monthly growth since July's 1.1 million expansion, that would be more than 125% above the 5-year pre-Covid average.
Silver prices also rose with gold bar quotes in London today, regaining the $24 per ounce level with a rebound of $1 from yesterday's low.