END_OF_DOCUMENT_TOKEN_TO_BE_REPLACED

GOLD BARS settled in London's wholesale market gained and then gave back $5 per ounce in what one bullion desk called yet more "sleepy" trade on Tuesday as global stocks fell for a third session running amid a fresh surge in energy prices.
US crude oil last night broke above $80 per barrel for the first time in 7 years, while European natural gas contracts for November and December 2021 today added 1.9% to trade almost 3 times higher from 3 months ago.
Large gold bars delivered in the world's central storage and trading hub rose to $1761 before dropping back but holding above Tuesday's earlier dip in Asian trade towards $1750.
Silver bullion meantime dipped to 4-session lows beneath $22.40 per ounce, while platinum – primarily used in diesel-engine emissions reduction catalysts – held 1.5% below Friday's 8-week closing high of $1028.
"Profound changes [and] new challenges" in global power markets means China will now seek to "ensure stable energy supply" and prioritize "energy security", Beijing's Communist dictatorship said Tuesday, while continuing to target lower carbon emissions over time.
"[China will] build advanced coal-fired plants as appropriate," said the press release from Prime Minister Li Keqiang, while "domestic oil and gas exploration will be intensified."
China's President Xi Jinping is currently alone among major nation leaders in so far failing to confirm his attendance at next month's COP26 climate-change summit in Glasgow.
Ahead of tomorrow's Consumer Price Index report for September, inflation forecasts in the US bond market today reached their highest since May's multi-year highs, reaching 2.52% per annum on 10-year breakevens.
That lags August's 3-decade record for actual CPI inflation of 5.3% per year. 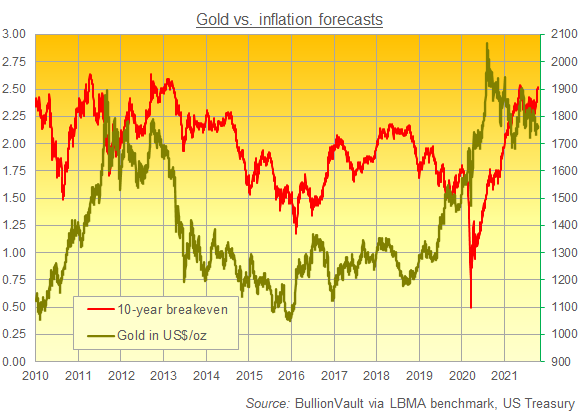 "Resting bids" in the large-bar gold market around $1750 "restricted a break below the figure" in Asian trade today, says a note from Swiss bullion-bar refiners and finance group MKS Pamp.
"Dollar declines and a robust Shanghai premium toward $9.50 over London spot [then saw] bullion test the precious session high of $1761."
China's stock market meantime lost 1.1% on the day and Hong Kong shed 1.4% as real-estate giant Evergrande was rumored to have missed almost US$150m in debt servicing and repayments so far.
"Yields on China corporate junk bonds trade at decade highs," says a headline at the Financial Times.
European equities then sank over 1% at the start of Frankfurt trade as new ZEW surveys said economic sentiment across the 19-nation single currency zone is sinking in the face of rising energy costs and supply-chain bottlenecks.
Priced in the Euro, gold bullion bars peaked Tuesday morning at €1528 per ounce, the highest since Friday's spike on weaker-than-expected US jobs data.
The UK gold price in Pounds per ounce meantime traded unchanged for the week so far at £1292 as new data said the number of people in employment has set a new all-time high, with job vacancies also at a record.
The total number of hours worked in the UK each week however remains over 3% below its pre-Covid peak at a level first reached 5 years ago.
Prime Minister Boris Johnson is likely to back the Department for Business, UK media said today, in a row with the Treasury over offering emergency loans to manufacturers hit by surging energy prices, with the UK steel industry already asking for £50m to help it cut prices to compete with European output.
"This energy crisis continues to dominate market sentiment," says specialist consultancy Metals Focus' south-east Asia expert Harshal Barot, "and that's underpinning gold prices."
"There are concerns that inflation is now probably not as transitory as earlier expected."