END_OF_DOCUMENT_TOKEN_TO_BE_REPLACED

GOLD BARS in London's wholesale market set fresh 1-month highs at $1980 per ounce on Wednesday, gaining as energy prices rose again, European equities slipped, and the Japanese Yen fell to its lowest in 2 decades on the FX market amid the worsening economic cost of inflation worldwide.
Russia meantime claimed that Ukrainian marines defending its assault on the port city of Mariupol had surrendered overnight, while US President Joe Biden accused the Moscow's Vladimir Putin of "genocide".
With bond yields holding longer-term interest rates at multi-year lows and the MSCI World Index already at a 1-month low, global stocks markets fell for the 6th session out of 9 so far in April.
Tokyo bucked that trend, sending the Topix 1.4% higher as the Japanese Yen sank to its lowest since May 2022 on the currency market at worse than ¥126 per Dollar.
"The unstoppable decline is largely due to the fact that the economic structure has changed so that the outflow of money due to high resource prices cannot be covered by the increase in exports," says the Nikkei business newspaper.
The Yen's latest plunge saw gold prices for Japanese investors rise to fresh record highs above ¥8,000 per gram.
That's almost twice the price from the start of gold's latest bull market in mid-2018. 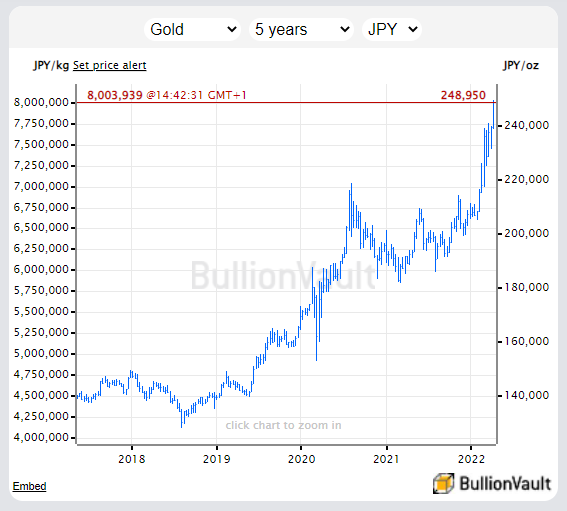 "Recent rising inflation, driven by higher import costs, weighs on Japan's economy," added Bank of Japan governor Haruhiko Kuroda – now fighting a 20-year war against deflation, and vowing again to maintain Tokyo's extreme monetary stimulus today – "by reducing households' real income and corporate profits."
More widely, "Stagflation risks are rising, encouraging investors to divert funds to safe havens such as gold," reckon analysts at Australasian bank ANZ, forecasting that "prices will be inching towards $2000 soon."
"Gold above $1877 can maintain an immediate upward bias in the broader sideways range," claims a technical analysis of gold price charts from Swiss bank Credit Suisse.
"[But] only a rise above the $2070-75 highs would resolve the range higher for a fresh bull trend, with resistance then seen at $2280-2300."
With inflation in the UK hitting new 3-decade highs at 7.0% on today's data for March, the UK price of gold bullion bars in Pounds per ounce rose to £1520 as British Prime Minister Boris Johnson refused to resign over breaking his own Covid lockdown laws in the 'partygate' scandal.
Euro gold prices also hit 1-month highs, briefly touching €1830 per ounce ahead of tomorrow's European Central Bank decision on interest rates – expected to stay at minus 0.5% – and new quantitative easing bond buying, expected to be 'tapered' more rapidly as the cost of living rises at a record currency-union pace.