END_OF_DOCUMENT_TOKEN_TO_BE_REPLACED

GOLD BARS traded in London's wholesale market rallied from yesterday's sharp drop on Thursday as ceasefire talks between Russia and Ukraine failed to make any progress, new data put US inflation at a fresh 4-decade high, and the Eurozone moved to end its QE stimulus sooner as energy prices rose again.
Consumer-price inflation in the US last month reached 7.9%, the Bureau of Labor Statistics said today.
Even excluding fuel and food prices, however, the cost of living rose 6.4% on the 'core' CPI measure – also the fastest pace since the deep recession of 1982.
Interest rates at the US Federal Reserve were then above 14% and gold bullion bars cost $400 per ounce.
With gold prices touching near-record Dollar highs this Tuesday at $2065, the Fed under Jerome Powell is expected to raise rates at next week's March policy meeting from 0% to a ceiling of 0.50% per annum. 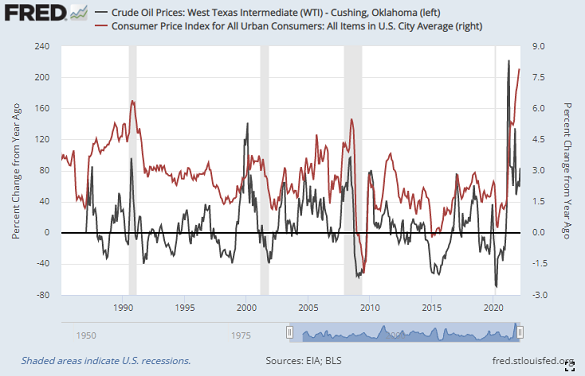 The United States has now embargoed crude oil from Russia – the world's 3rd largest producer, but with exports to the US accounting for just 3% of the world No.1 economy's daily demand – leaving European nations to set zero-import targets for the end of 2022 or later.
Crude oil today rallied to $110 per barrel of WTI, recovering a little of yesterday's 16% plunge from 14-year highs.
"Inflation has continued to surprise on the upside because of unexpectedly high energy costs," claimed European Central Bank president Christine Lagarde on Thursday.
"[But] price rises have also become more broadly based [and] the Russia-Ukraine war will have a material impact on economic activity and inflation through higher energy and commodity prices, the disruption of international commerce and weaker confidence."
Leaving deposit interest rates at minus 0.5% for the 30th month running, the ECB will now cut new quantitative easing bond purchases to €20 billion per month in June, rather than October as previously scheduled.
As global stock markets erased and then reversed earlier gains on news of Russia pressing ahead with its increasingly murderous invasion of Ukraine after their  talks in Turkey broke up, the Euro jumped 1 cent on the ECB news to hit a 1-week high of $1.10 before easing back on the FX market.
That put the price of gold in large wholesale bullion bars below €1810 per ounce, down almost 5.0% from Tuesday's fresh all-time high.
Gold priced in the British Pound meantime rallied harder, recovering the £1520 mark after swooning 5.3% from Tuesday's fresh all-time high just shy of £1580.
"Those who buy clubs are not footballers, but business people," says Ghanaian politician and entrepreneur Bernard Antwi Boasiako, apparently making an official bid of $3.1bn for London football club Chelsea as the UK Government finally sanctioned the current owner, Russian oil and gas billionaire and former regional governor Roman Abramovich, freezing his assets and therefore making a sale impossible due to his close personal and business ties to the Putin Kremlin.
"I am also a businessman. I'm into gold mining. Why can't we buy the club?" asks Boasiako, better known as Chairman Wontumi and currently the Ashanti Regional Chairman of the New Patriotic Party, who according to GhanaWeb "launched a new radio and television station in Kumasi to  help propagate the policies and programs of the ruling NPP.".
Regularly "flaunting" gold bars to prove his wealth on live TV and during interviews on his own radio station, Wontumi in 2017 won a $1bn claim against the Ghanaian government over the destruction of mining equipment apparently ordered by the country's then-president.
An output tax of 3% imposed in 2020 on small-scale mine operations such as Wontumi owns saw $9bn of gold from Africa's No.1 mining nation go missing from official export data last year on some estimates.
Last year the Saudi Arabian government's PIF sovereign wealth fund bought Newcastle United for a little over $400m, passing the Football Association's "Owners' and Directors' Test" despite the Kingdom's poor record on human rights and the PIF chairman – Crown Prince Mohammed bin Salman – being directly implicated in the murder of journalist Jamal Khashoggi. 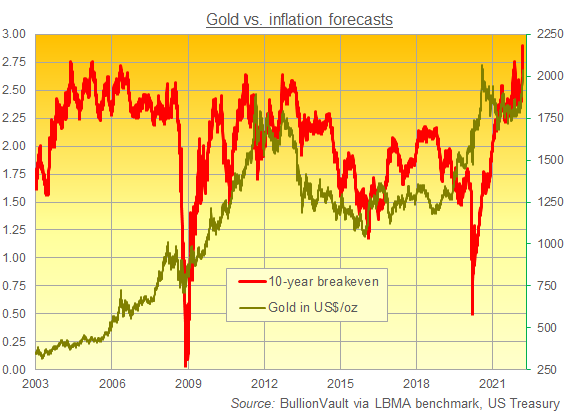 Thursday's US inflation saw US government bond prices fall again, driving the annual yield offered by 10-year Treasury debt up to 2.00%, the highest since the eve of Putin's invasion of Ukraine 3 weeks ago.
While that's still below the 2.5-year high of 2.05% reached in mid-February, it also took the bond-market's implied outlook for inflation over the next decade back towards this week's peak at 2.90% per year – the highest since 'breakeven' rates were first calculated via Treasury inflation-protected yields in New Year 2003.
"Gold drops as lower oil, global cues help risk appetite," said a headline at Reuters this morning, soon changed to read "Gold resumes advance as Ukraine worries return."
The overnight retreat in global gold prices saw Shanghai prices reduce their sudden discount to London quotes, presenting a disincentive to new imports of $2 per ounce after reaching $6 yesterday.
That discount still contrasts with a typical premium for bullion landed in China – gold's No.1 consumer market – of more than $8 per ounce.
With gold retailers reporting heavy customer selling across major markets in recent weeks, "UAE's gold shoppers hit pause on selling for cash" on the overnight price drop, says Gulf News, snapping "five hectic days of UAE consumers selling part of their gold holdings."