END_OF_DOCUMENT_TOKEN_TO_BE_REPLACED

GOLD BARS traded in London's bullion market headed for a solid weekly gain in terms of all currencies except the Japanese Yen on Friday as central bankers vowed to fight inflation even while keeping interest rates at zero or below, and world stock markets fell in the face of rising inflation and geopolitical tensions.
After President Putin of Russia, now the world's 5th largest national gold bar reserves holder, said Monday that Moscow "will not allow so-called colour revolutions" against the governments of any former Soviet states, his deputy foreign minister last night threatened to station troops in Latin America if the Nato alliance doesn't agree to Moscow's demand that it never accepts neighboring Ukraine as a member.
Fighting inflation, now at 4-decade highs in the US, is the Federal Reserve's "most important task" said Fed vice-chair nominee Lael Brainard in testimony to Congress yesterday.
With inflation now running above 7% per year, Fed interest rates remain today at 0%.
"We understand that rising prices are a concern for many people," said European Central Bank chief Christine Lagarde in a speech Friday, "and we take that concern very seriously.
"Our commitment to price stability remains unwavering."
While Eurozone inflation last month hit 5.0% for the currency union's 340 million citizens, the ECB's key interest rate is currently minus 0.5% per annum.
Rising 1.4% in Dollars and 0.9% in Euro terms from last Friday, gold bullion bars priced in Japanese Yen slipped for the week however, losing 3.3% from early November's near-record highs after Reuters reported that Tokyo's central bank has begun debating how to start tightening monetary policy after 2 decades of relentless quantitative easing and more than 5 years of sub-zero central-bank deposit rates. 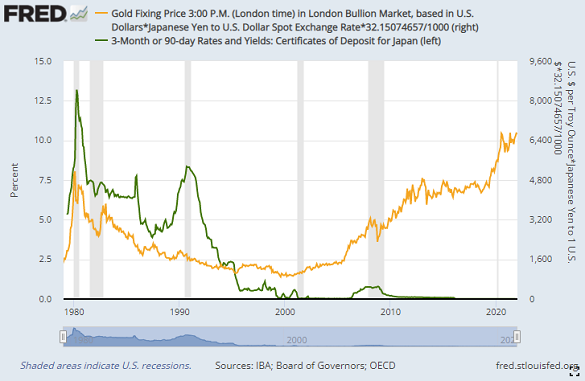 "The Bank of Japan never committed to keep rates on hold until inflation exceeds [its target of] 2%," the newswire quotes 3 'sources'.
"That means theoretically, it can raise rates before inflation is sustainably above the target."
Shares in French electricity giant EDF (EPA: EDF) meantime crashed by 25% at today's market open in Paris after President Macron – now 3 months away from national elections – ordered the state-backed firm to sell electricity to competitor companies below market prices in a bid to curb inflation, a move EDF says will cost it €8.4 billion ($9.6bn).
Germany's Postbank is facing strike action this weekend by staff at 40 branches demanding higher wages to offset the worst inflation since the early 1990s.
Clipping gold bullion bar prices back to $1820 per ounce, the US Dollar today rallied from 2-month lows on the FX market, rising against both the Euro and the Pound even as France and Spain confirmed multi-year highs for consumer-price inflation and the UK reporting that GDP in the world's 5th largest economy grew above pre-Covid levels for the first time in November, before the Omicron variant spurred a return to social distancing.
"To protect the French from inflation" – now running at 2.8% or 3.4% depending on which index you follow – the interest rate offered by the popular state-run Livret A savings account will double to 1% per year from February, announced finance minister Brune Le Maire today.
"Number 10 has apologised to the Palace" meantime in the UK, said a spokesman today following the latest revelations of rule-breaking parties held during lockdown inside the Prime Minister's official residence, with a 'farewell' party for Boris Johnson's then-PR chief (and now Sun newspaper deputy editor) James Slack taking place the night before Prince Phillip's funeral last April, at which the Queen famously sat alone to meet social distancing rules.
The leaders of both Labour and the Liberal Democrat opposition parties have now called publicly for Johnson to resign, as have 5 of his own MPs, now including a leading 'Brexiteer'.
The Metropolitan Police, whose officers guard Downing Street, repeated on Friday that it will not investigate any of the parties unless No.10's internal investigation, commissioned by and reporting to Johnson himself, "identifies evidence of behaviour that is potentially a criminal offence" – a decision already threatened with judicial review by 'activists' the Good Law Project.
The price of gold bullion in UK Pounds today rallied to £1332 per ounce, showing a £10 weekly rise.
Gold bars priced in Euros also rose back towards this week's highs, trading at €1595 for a gain of 0.9% from last Friday night's finish.
With a small sales of gold cutting Moscow's 2021 addition back to zero in November, the Russian Ruble slipped towards 9-month lows today after talks between the world's major military powers being held in Vienna about re-instating the 2015 Iran nuclear deal broke down.
We "have only a few weeks left" before he talks fail entirely, the US negotiator said Thursday, but Russia's foreign minister said he is "optimistic" about "real progress".
Russia's Federal Security Service (FSB) meantime said today it has "suppressed the illegal activities" of the REvil hacker group following an "appeal from the relevant US authorities."
But Ukraine was however hit by a cyberattack Friday, blamed by Kiev on Moscow, which posted the words "Be afraid and expect the worst" across government websites as Russia massed more troops on its border with the former Soviet state.