END_OF_DOCUMENT_TOKEN_TO_BE_REPLACED

GOLD BARS traded in London, heart of the global bullion market, rallied against a rising US Dollar ahead of the Federal Reserve's September interest-rate hike on Wednesday after Russia threatened nuclear attacks against the Nato alliance for interfering with its invasion and annexation of Ukraine.
Faced with domestic dissent after Ukraine re-took key cities from Russian troops, President Vladimir Putin also declared a "partial mobilisation" to call up reinforcements – spurring one-way airflights out of Russia to sell out – and called for people still living in Russian-occupied areas of Ukraine to vote on becoming part of Russia's official territory.
Global stock markets slipped again after the MSCI World Index fell 1.0% yesterday, dropping to the lowest level in 2 months, while most Western government bond prices rallied with gold bullion bars, edging longer-term borrowing costs down from this week's new multi-year highs.
Gold last week lost "key support" at $1690 and may target a drop to $1640 per ounce says analysis from bullion-market specialist Rhona O'Connell at gold-bar, commodity and financial brokerage StoneX.
With prices stabilizing around $1675 however, "It looks as if gold is discounting a 75 [basis] point hike," she adds, rather than the full 100bps hike still attracting almost 1-in-5 bets among Fed funds futures traders this morning.
A third hike of 75bps today would take the Fed's overnight interest rate to 3.25% per annum. Inflation last month ran at 8.3%. 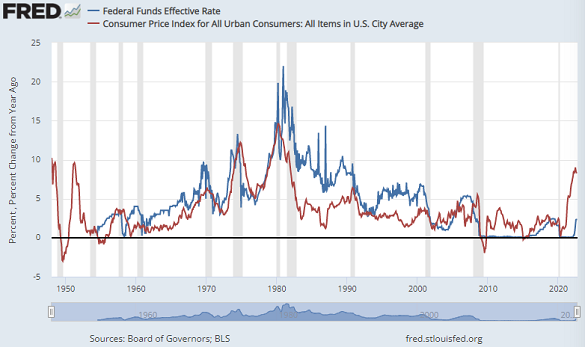 Despite the geopolitical turmoil, "It seems unlikely that gold ETF inflows will sustainably rebound," says a note from US financial giant Citi, "until traders crystalize a turn in the Fed tightening cycle and/or there is consensus on a US/global recession."
Investors in giant gold ETF the GLD liquidated another 0.5% of their shares yesterday, shrinking the quantity of gold bars needed to back its value to the smallest in 2.5 years.
Silver's giant SLV ETF meanwhile grew 0.6%, expanding for the 5th session in a row as the gray metal rallied towards this morning's 1-week high near $19.70 per ounce, continuing to outperform the price of gold bars in wholesale bullion trade after marking its own 2-year lows versus the Dollar this summer.
Over in the bond market, 10-year US Treasury yields retreated 5 basis points this morning after hitting the highest since 2011 above 3.50% on Tuesday, while the Dollar again rose towards early September's new 2-decade highs on the currency market.
Ten-year UK Gilt yields rose in contrast, almost alone among Western government borrowing costs in going higher ahead of the US Fed decision and hitting new 11-year highs some 2.5 percentage points above this time 12 months ago at 3.30% per annum.
The Bank of England is widely expected to hike its base rate by 0.75 points to 2.5% on Thursday. UK inflation ran at 10.1% in August.
"Soaring inflation led interest costs on UK government debt to hit a new record for August," reports the BBC, after inflation-linked bond payments reached £8.2 billion last month, more than 1/5th larger from August last year.
The Kremlin's move to call up 300,000 reservists for military service is "a clear admission" that Putin's invasion of Ukraine "is failing" said the office of UK Prime Minister Liz Truss Wednesday morning.
US President Joe Biden will today tell the General Assembly of the United Nations in New York that Russia has "violated core tenets" of the UN, urging more international action against the Kremlin's
"naked aggression".
European natural gas prices meantime rallied, but held 40% below late-August's peak for December delivery, as Germany nationalized the country's No.1 gas importer in its latest attempt to avert a winter energy crisis.
The price of crude oil – for which Western Europe also finds its major source of supply from Russia – also rose, trading above $91 per barrel of Brent.