END_OF_DOCUMENT_TOKEN_TO_BE_REPLACED

GOLD BARS traded in London wholesale market rose for a fourth morning running on Wednesday, holding near 2-week highs against a rallying US Dollar as world stock markets steadied and bond prices also flat-lined, holding longer-term interest rates at 3-week lows.
Trading above $1240 per ounce, the price of large gold bars also gained for non-Dollar investors as the Euro retreated from Tuesday's new 14-month highs on the FX market ahead of Thursday's European Central Bank decision on rates and QE bond buying.
The Bank of Japan decides Yen rates and QE tomorrow as well, and is also expected to keep policy unchanged.
"Gold has embarked on a rebound," says a technical analysis from bullion market-making bank Societe Generale, "and has now come up against an up-sloping trend at $1239/1242.
"If this gives way, there will be a risk of further recovery towards late June highs of $1255/1260."
Fundamentally meantime, "We forecast mine supply declining," says a note from Swiss bank Credit Suisse, "[with] geopolitical uncertainty and wealth preservation stoking bar hoarding."
Over the last week however, investor interest in the largest exchange-traded gold vehicle – the SPDR Gold Trust (NYSEArca:GLD) launched in late 2004 – has shrunk by 0.9% despite Dollar gold prices rising 2.5% over that same period.
That liquidation has forced the outflow of 10.9 tonnes from the gold backing the GLD – its heaviest-ever redemption across 5 trading days of rising gold prices – taking the total down to 5-month lows at 821 tonnes.
The largest silver ETF – the iShares Silver Trust (NYSEArca:SLV) – has also shrunk over the last week, but only by 0.2% and also from its largest size since last November, reached as prices touched their lowest levels since spring 2016 last Monday. 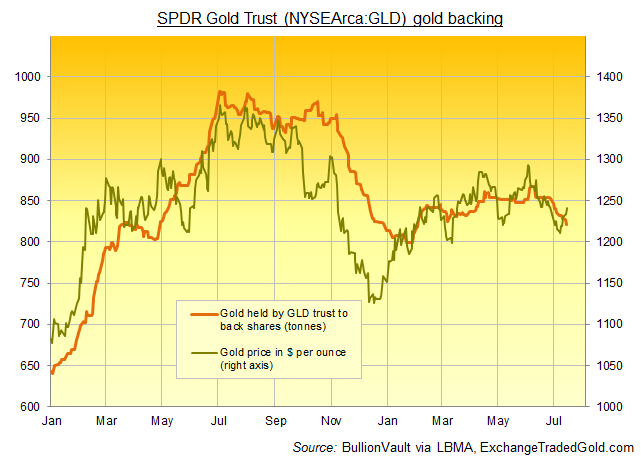 Shanghai gold prices today held at 2-week highs against a rising Chinese Yuan, keeping the premium to London quotes above $9 per ounce for bullion delivered in the world's No.1 mining, importing and consuming nation.
No.2 consumer India may "have its own good delivery norms" on a proposed bullion exchange reports the Business Standard, quoting comments from trade association IBJA secretary Surendra Mehta on the need for "Indian rules" which may diverge from the globally-accepted London Bullion Market Association rules and approved-refiner list for large wholesale-market gold bars.
With India's refining industry however struggling to source material after a wave of over-investment, "There can be no compromise on precision and quality" says Rajesh Khosla, managing director of India's only LBMA-accredited fabricator, the government-backed MMTC-Pamp.
China today has 9 gold refineries on the LBMA's current list for manufacturing Good Delivery gold bars, second only to Japan.
Gold bullion exports today remain banned by both China and India.