END_OF_DOCUMENT_TOKEN_TO_BE_REPLACED

BUY GOLD prices held above yesterday's new 13-week lows against a surging US Dollar in London trade Thursday as global stock markets sank again, commodities slipped, and so-called cryptocurrencies crashed amid the worst inflation in 4 decades and the steepest US Fed rate hikes in 2.
Regularly promoted as "digital gold" since its invention in 2009, original crypto Bitcoin today sank towards $25,000 per unit – its cheapest since Christmas Day 2020 and down 61.7% from last November's record high.
Shares in crypto exchange Coinbase (Nasdaq: COIN) sank to new all-time lows after it warned that customers will become "general unsecured creditors" with no direct claims on the digital assets it holds in the event it declares bankruptcy.
Crypto-promoter Michael Saylor's tech business MicroStrategy (Nasdaq: MSTR) meantime sank back to pre-2021 spike prices after he offered to pledge some of the company's $3.3bn in current Bitcoin holdings against its $2.4bn in debt. 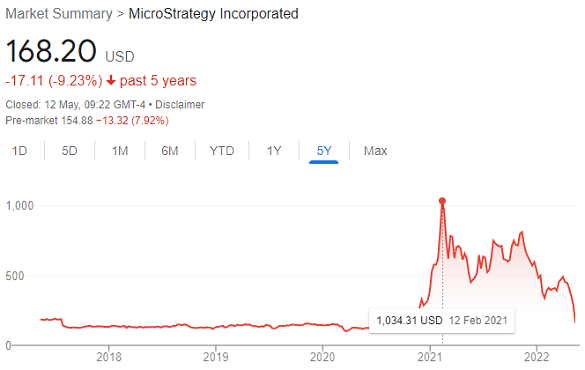 Peaking at $3 trillion last November, the global market cap of all cryptocurrencies has now sunk below $1.2trn, falling by one-third this week alone as 'algorithmic stablecoin' Terra has flopped.
"[While] some have called this a 'Lehman Brothers' moment due to the contagion it may cause," BusinessInsider quotes one crypto pundit, "I am optimistic that UST's fall would not be that catastrophic
"A collapse of USDT [Tether] would be though."
"The equity bear market has begun, especially in tech," says former HSBC asset manager and now crypto-gold fund manager Charlie Morris at ByteTree, "which has helped gold outperform stocks.
With short-term interest rates still deeply below inflation, with gold priced in most of the world's currencies showing an underlying uptrend, "[This] may set gold up for a prolonged period of outperformance."
Bond prices meantime rallied on Thursday, pushing down longer-term interest rates from this week's new multi-year highs.
Further strength in the Dollar – today hitting fresh 2-decade FX highs on its trade-weighted index against the rest of the world's major currencies after yesterday's stronger-than-expected US inflation data – saw most commodity prices edge back, with crude oil dropping 1.3% despite worsening Nato-Russia tensions after neutral Finland declared its intention to join the North Atlantic military alliance due to Moscow's invasion of Ukraine.
"We would expect gold to get support from the higher inflation environment," Reuters quotes WisdomTree ETF group's analyst Nitesh Shah.
"The Dollar has actually gained quite a bit since [Wednesday's] CPI print and that's prohibiting gold from making gains."
But with prices to buy gold in Dollars falling below $1840 per ounce on Thursday, the UK gold price in Pounds per ounce held above £1500, halving the week's earlier £35 drop.
Euro gold prices meantime erased 2/3rds of this week's drop, trading at €1767 to regain €30 per ounce from yesterday's 5-week low.