END_OF_DOCUMENT_TOKEN_TO_BE_REPLACED

GOLD BULLION dropped 1.3% against a rising US Dollar in London trade Tuesday, falling to a 3-session low of $1122 per ounce as Western stock markets sank with commodity prices.
Copper lost 3.9% and silver bullion lost 3.3% to approach 1-week lows beneath $15 per ounce – a new 5-year low when first breached last November.
New York's Dow Jones stock index dropped over 200 points at the open, falling 1.3% to near 2-week lows.
Platinum meantime lost 3.4% on the day, pushing the metal – most heavily used to reduce emissions from diesel engines – to its widest discount to gold bullion since the early 1980s as the scandal over VW's false emissions tests widened beyond the US.
Trading down to a 6-year low of $942 per ounce, platinum was priced at less than 85% of one ounce of gold. That compares with a 65-year average of 175%. 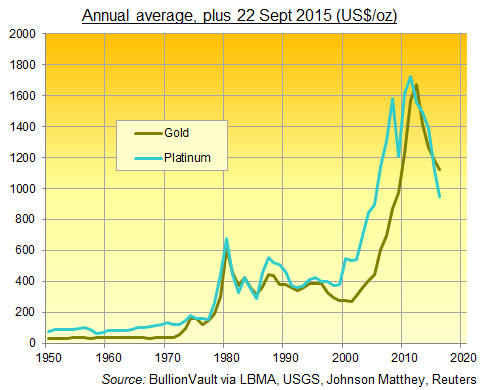 "Gold swept down in London," says one bullion bank's note, "and [is] looking vulnerable to further losses."
Major government bond prices rose in contrast on Tuesday, driving 10-year Treasury yields down towards their lowest level of the last month at 2.16% per annum.
A near 2-week high in the US Dollar against the Euro helped gold bullion hold around €1007 per ounce – unchanged for the week so far.
New data from Switzerland meantime showed the world's central bullion refining nation almost doubling its exports of gold to China and Hong Kong last month from July, totaling some 36 tonnes.
Swiss gold exports to India were larger at 66 tonnes, matching the previous month's figure.
"Some supply and demand fundamentals," says a note from Swiss bank and major bullion shipper UBS, "suggest that the gold market is nearing equilibrium."
More importantly for price outlook, US real interest rates – accounting for inflation – "may settle lower versus previous cycles and versus current market expectations," UBS adds.
"[US Fed chair] Janet Yellen killed [last] week's equity rally," says a note from Swiss refining and finance group MKS's trading desk on the central bank's failure to raise rates from zero, "by bringing front and centre the very things investors had hoped to get past: murkiness over the global economy and [over] interest rates."
After the longest run of no change since June 2014 however, bullion holdings for the world's largest gold ETF – the New York-listed SPDR Gold Trust (NYSEArca:GLD) – shrank half-a-per-cent on Monday to below 675 tonnes, a new 8-year low when first reached earlier this summer.
"Gold [priced in Dollars] has recovered off to the 6-week support line," reckons a technical analysis from Karen Jones at Germany's Commerzbank, "and is well placed to challenge the 2015 downtrend [now] at $1150" per ounce.