END_OF_DOCUMENT_TOKEN_TO_BE_REPLACED

After more than half a century of Sterling depreciation, the future remains bleak for the Pound...

The UK was the dominant economic power in the 19th century and Sterling's link with gold helped to establish the gold exchange standard which prevailed across the global economy until 1914. The UK remained committed to gold after the First World War, and briefly returned to its pre-WW1 parity from 1926-1931.

And even though the UK departed from the gold standard in 1931, it was soon followed by the US (in 1933) and other European nations.  As a result, the external value of Sterling against other currencies was sustained in the 1930s.

It was after the Second World War that Sterling began its long decline. Immediately after WW2,  the pound returned to a parity of £1= $4, which was not far out of line with the value it had sustained against the US Dollar before the Second World War and in the 19th century. But this proved unsustainable and Sterling was devalued in 1949 to $2.80, alongside a number of other realignments of European currencies. 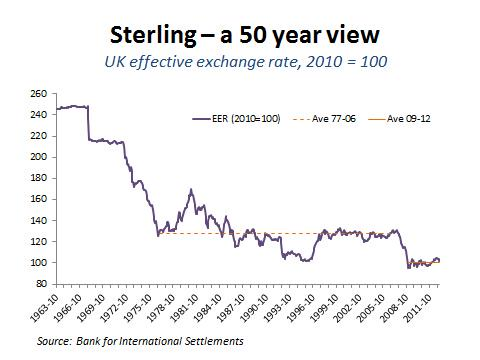 This parity was sustained under the Bretton Woods system of fixed exchange rates until 1967 when Sterling was devalued again from $2.80 to $2.40. That was the beginning of a slippery slope for the external value of the UK currency. After the Bretton Woods system broke down in the early 1970s, Sterling fell rapidly to around half of its late 1960s value (see chart) in 1976 – when the UK was obliged to request IMF assistance, a humiliating experience for a major industrialised nation.

Contrary to expectations in the late 1970s, Sterling stabilised and maintained a fairly consistent value against its major trading partners for the next 30 years. In the late 1970s and early 1980s, Sterling was supported by a petro-currency effect as North Sea oil came on stream – with the pound rising above $2 again in the early 1980s. The UK's improved inflation and growth performance in the 1980s also provided a support to Sterling.

Sterling suffered again in the Lawson boom of the 1980s, but the high interest rates introduced to rein in the boom supported the UK currency. And though the attempt to peg Sterling against the Deutschmark and other European currencies failed in the early 1990s, the depreciation which followed the Pound's departure from the ERM was short-lived. The Pound appreciated strongly in 1996/97 and maintained a relatively stable value from then until 2007.

The financial crisis of 2007/8 precipitated another fall in Sterling. Between mid-2007 and early 2009, the UK currency fell by around 25% against the Euro, Dollar and other currencies. At that time, Sterling's decline appeared to be justified by the perception that that the financial crisis would have a disproportionate impact on the UK economy. As it turned out, that was not the case.  But the dovish stance of the MPC – resisting interest rate rises in 2010/11 and pursuing second and third rounds of QE – worked to prevent any substantial rebound in Sterling.

Sterling did strengthen somewhat in 2012, as financial flows sought a safe haven outside the Euro area. But these flows are now reversing.  And currently there is little official support for Sterling – with the Governor of the Bank of England and government ministers arguing publicly that a weak Pound is necessary for the "rebalancing" of the UK economy – despite relatively little evidence so far for that proposition. (See my recent PwC blog – "Still selling England by the Pound".)

With this lack of official support, recent poor growth figures, relatively high inflation and stubbornly high public borrowing, it is not surprising that Sterling is under pressure. And it is not clear that the recent pattern of Sterling decline can be easily reversed. In the words of Status Quo, it appears to be "Down, down, deeper and down" for Sterling!

Buy gold in Sterling, Euros and Dollars, with access to the lowest possible live prices online, when you open an account today at BullionVault...