END_OF_DOCUMENT_TOKEN_TO_BE_REPLACED

SPOT GOLD prices jumped near 2-week highs at $1232 per ounce Friday lunchtime in London as weak US retail sales and inflation data saw the Dollar drop hard on the forex market.
Consumer prices rose 1.6% in July from a year earlier, the Bureau of Labor Statistics said – the weakest inflation since before Donald Trump won the presidential election last November – while retail sales fell for a second month running, also defying analyst forecasts.
The Euro jumped half-a-cent towards this week's 2-month highs versus the US currency, while the Japanese Yen jumped to a 2% gain for this week at its strongest level since 3 July.
The spot gold price outpaced them both however, rising to a weekly gain for Eurozone and Japanese investors and adding 0.6% from last Friday against the British Pound.
Major government bond prices jumped having weakend badly since the US Federal Reserve raised Dollar interest rates to a ceiling of 1.25% this time last month.
That pushed bond yields sharply lower across the board, with 10-year US Treasurys offering its lowest rate so far in July at 2.28%.
"Tightening actions by the Fed and other major central banks [would] create a negative backdrop for gold prices," said a note earlier from bullion clearing bank HSBC
But "while yields on US and Eurozone debt have been rallying as [their] respective central banks turn attention to unwinding monetary stimulus," says Jonathan Butler at Japanese conglemerate Mitsubishi, "the yield on 10-year Japanese government bonds [JGBs] has remained close to zero.
"This is no accident – in fact it is a direct result of the Bank of Japan's policy of 'yield curve targeting' whereby QE [money creation and bond buying] is dialed up and down as needed in order to keep the yield around the 0% mark" on the 10-year JGB, with the aim of boosting corporate borrowing and investment.
"All other things being equal," Butler concludes, "if Japanese yields remain low while US yields are rising, the Yen will lose ground to the Dollar and Yen-denominated precious metals prices will rise.
"This brings the risk of profit taking by physical investors in the Japanese large bar market." 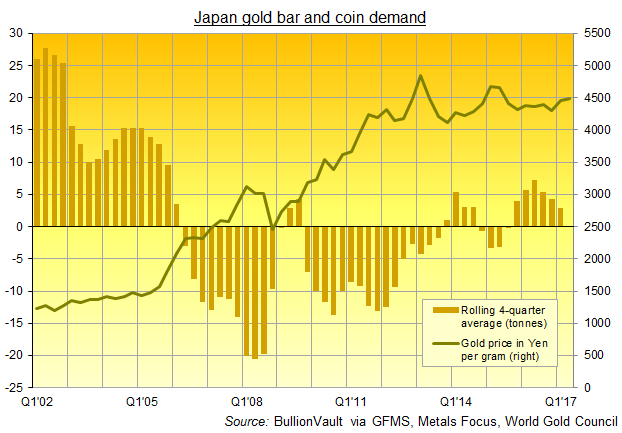 Building their holdings of gold bar and coin during the first decade of Japan's economic deflation starting with the 1989 Tokyo crash, Japanese households turned net sellers as Yen prices rose sharply in the early 2000s, and continued taking profit amid the global financial crisis.
A falling Japanese Yen would also, however, likely see gold priced in Dollars fall as well if 2017 patterns hold according to daily from the bullion and currency markets.

Gold's relationship with the Japanese Yen's value in US Dollars yesterday reached its strongest since mid-June, holding shy of April's record level.
On a rolling 1-month basis, the Yen now shows a daily correlation with gold priced in Dollars of 0.95. That statistical relationship would read 1.00 if gold and the Yen moved absolutely in lockstep with each other.
Averaging 0.30 across the last 20 years, gold's correlation with the Yen has strengthened to average 0.85 so far in 2017 – stronger than gold's 1-month rolling correlation of 0.83 with silver prices.
Ten-year Japanese government bond yields slipped one notch to 0.07% after Friday's poor US data.
Tokyo's Topix index of Japanese stocks had earlier closed near Wednesday's new 2-year highs, higher by one-third from this time last year.
Spot gold priced in Japanese Yen held little changed from mid-July 2017 at ¥4,445 per gram.
Looking at US-listed precious metals vehicles, gold's failure to rise in price Thursday saw shareholdings cut again in the giant SPDR Gold Trust (NYSEArca:GLD), taking the total liquidation since this time last month to 4.4% – the same percentage by which Dollar gold prices have fallen.
Silver's largest ETF in contrast – the iShares Silver Trust (NYSEArca:SLV) – has grown 3.8% in size since mid-June as that metal fell 7.3% in price.