END_OF_DOCUMENT_TOKEN_TO_BE_REPLACED

SILVER PRICES leapt and gold bullion rallied Thursday lunchtime in London after new US data said the world's largest economy expanded in line with analyst forecasts at the end of 2020 but inflation was much weaker than expected.
Western stock markets struggled after yesterday's steep drop on Wall Street ahead of the Federal Reserve's "no change" decision on monetary policy.
US and other major government bond prices then dropped, edging long-term interest rates higher, as GDP growth met Wall Street's 4.0% consensus figure.
But gold regained the week's earlier 1.3% loss for Dollar investors after core PCE inflation for the fourth quarter came in at 1.5%, sharply down from Q3's reading of 3.7%.
Silver prices meantime jumped as a campaign grew among long-time silver bugs to attract the "Reddit crowd" of young day-traders currently squeezing heavily-shorted US shares higher. 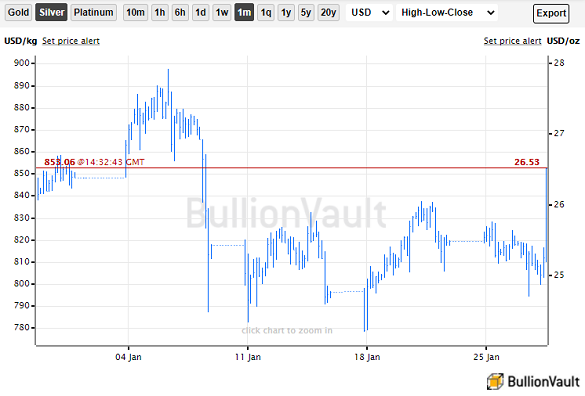 "GameStop's surge is making it one of the most traded stocks in the U.S," says MarketWatch of the video-game maker now shooting 1,740% higher for the year so far after small traders – egged on by Tesla CEO Elon Musk – piled into leveraged bets on the stock via the RobinHood platform on news that hedge funds have borrowed and sold huge quantities of its shares to try profiting from a price drop.
"'Weaponised' options trading turbocharges GameStop's dizzying rally," says the Financial Times.
"I do think this is a seminal moment," CNBC quotes Reddit co-founder Alexis Ohanian.
"I don't think we go back to a world before this, because these communities, they're a byproduct of the connected internet."
"REDDIT SILVER SHOCKER," claims one long-time silver blog. "Reddit traders now targeting silver.
"GameStop traded $82.3 billion In 4 days, enough to purchase more than 3X entire annual global silver mine production."
That was also equivalent to 13.5 days of silver clearing volumes in the London bullion market.
"Even if platforms were to remove all silver exchange-traded instruments, short-squeezers could keep it going by simply buying all available physical silver from bullion dealers," adds another long-time silver bug – and now crypto "pioneer".
Silver prices jumped $1 inside 45 minutes as New York trading began, but the Comex February futures contract showed no premium to London spot bullion quotes, suggesting no surge in leveraged speculation.
With silver prices reaching 3-week highs at $26.28 per ounce, gold prices rose back above $1857.
"We are going to see more global fiscal and monetary measures," says Harshal Barot, senior research consultant for South Asia at independent analysts Metals Focus.
"There are [also] concerns about stock market valuations, elevated government debts, so macro environment is still very positive for gold."
"No surprises in the dovish [US Fed] statement, with commitment to an accommodative monetary policy to continue," says today's trading note from Swiss refining and finance group MKS Pamp.