END_OF_DOCUMENT_TOKEN_TO_BE_REPLACED

GOLD PRICES whipped sharply at the start of New York trading on Wednesday, sinking almost $20 inside 30 minutes before regaining half that drop as the inauguration of Democrat President Joe Biden began in Washington amid ultra-tight security following the pro-Trump violence on Capitol Hill 2 weeks ago.
Silver also whipped violently with gold prices as Donald Trump left Washington aboard Airforce One, heading for a military send-off at Andrews Airbase and the first sitting President to skip the inauguration of his successor since the mid-19th Century.
With gold trading back at $1845, the spot silver price for London bullion regained half of its 50-cent drop, moving back above $25.35 per ounce.
"As Biden prepares his first 100 days in office, there may be a period of stagnating gold prices ahead of us," says a note from the precious metals team at French investment bank and London bullion market maker BNP Paribas, "[at least] until the 'honeymoon' ends.
"Markets currently trade on sentiment, [so watch] the reflationary narrative and optimistic outlook brought by the new US Government."
Further ahead, "If we see gold prices continue to rise through a good part of 2021," says the new Commodities Outlook from brokerage StoneX, "silver should follow a similar though more
exaggerated path."
After plunging in last March's Covid Crisis to a 10.5-year low as gold prices hit only a 4-month low, silver then became "the outperformer among the major base and precious metals over 2020, with a gain over the year of 48%," notes chief analyst Rhona O'Connell.
For jewelry demand, "Prices much above $30 are likely to work against silver while discretionary spending is still cautious. [But] silver industrial demand should make gains, notably in
electronics and solar uses...[leaving] the market in a [supply] surplus of roughly six weeks' industrial demand."
Western silver ETF investment demand will most likely "mop this up" says StoneX's new report, "and with supply price inelastic (only 25% of silver supply is from primary silver mines) the price action will, for the most part, remain closely allied to that of gold." 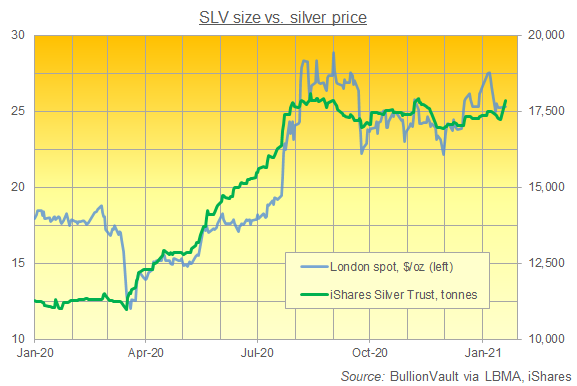 With Janet Yellen – Biden's nominee for Treasury Secretary – vowing to "go big" with stimulus spending at Tuesday's confirmation hearing, giant silver-backed exchange-traded trust fund the iShares Silver product (NYSEArca: SLV) expanded by a massive 3.6% for the day, showing its largest single 1-day inflow since at least summer 2019.
The first net inflow of investor cash since 5th January, yesterday's addition of 621 tonnes took the SLV silver ETF's total backing to 17,841 tonnes, its largest size since the Pfizer vaccine announcement of 9th November.
Gold prices will meantime return to $2000 per ounce "probably by the mid-second quarter," reckons Singapore bank OCBC's economist Howie Lee, "when a good amount of people get inoculated and
there's so much cash in the system with demand almost coming back to normal.
"People will start looking at inflation very closely then."
Inflation across the Eurozone however – the world's largest single currency bloc by GDP – turned negative across 2020, showing 0.3% annual deflation.
Only the 2nd negative year-end figure on record, that deflation was greater than 2015's figure but inflation rises to 0.2% on the 'core' measure stripping out fuel and food costs.
UK consumer price inflation meantime slowed from 1.7% to 0.6% across 2020 according to the Office for National Statistics today, but also showed more strength ex-fuel and food, reading 1.4% on core CPI.
Borrowing costs for the incoming Biden administration's $1.9 trillion spending plans today held firm at 1.10% per annum on 10-year Treasury bond yields.
Adjusted for inflation expectations that put the real rate of interest at minus 1.04%, a new multi-decade low when reached as gold prices topped above $2000 per ounce last summer.