END_OF_DOCUMENT_TOKEN_TO_BE_REPLACED

GOLD PRICES regained almost a third of yesterday's $100 plunge in Asian trade Tuesday before easing back to $1880 per ounce in London as global financial markets stabilized from the apparent shock of pharma-giant Pfizer announcing successful trials of a Covid-19 vaccine.
The EuroStoxx 600 index added 0.7% to Monday's 4.0% jump, but New York's S&P index of US stocks trimmed 0.3% off its 1.1% jump to last night's new record high, while the tech-heavy Nasdaq – whose components include home-delivery giant Amazon (NASDAQ: AMZN), streaming TV channel Netflix (NASDAQ: NFLX) and teleworking conference app Zoom (NASDAQ: ZM) – followed yesterday's 2.5% drop with another 1.6% fall.
Crude oil and industrial commodities continued to rise while government bond prices continued to drop as investors cut their holdings, pushing the yield offered by 10-year Treasury debt up to 0.96% per year – the highest since panic swept all financial markets in mid-March as the pandemic spread out of China into Asia, Europe and the Americas. 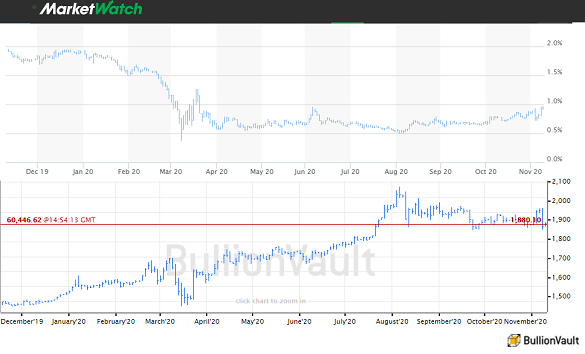 Among Western gold markets on Monday, trading volumes in Comex gold derivatives jumped to the highest since 24 March, the day that the UK's first national lockdown order saw New York futures jump to a record $100 per ounce premium over London spot bullion as traders bet that miners, banks and other providers of metal would struggle to make delivery across the Atlantic – a view which massive inflows of gold bars to US vaults then confounded.
Net demand for gold, silver and platinum was meantime strong on BullionVault yesterday, with trading volumes on the world's largest platform for private investment in physical precious metals leaping 473.4% from the prior 7-day average, reaching $31.3 million (£23.8m, €26.5m), the 12th heaviest day in the fintech's 15-year history.
The current record remains $49.7m of gold, silver and platinum traded on 11 August 2020, when gold fell 5.1% after setting fresh all-time highs at $2075 the previous week.
Losing 3.8% in US Dollar terms on Monday, gold has fallen harder 10 times in the past 10 years, four of them during underlying bull markets.
"Anyone entering the long side of gold on the back of the US political landscape," says the London precious metals team at French bank BNP Paribas, "has been bitterly reminded that Covid-19 developments around a vaccine were quite high up in investors' minds.
"With the move up across global equities, gold [in fact] performs as a safe-asset," the note goes on, reversing some of the investment inflows "first poured into this market at the onset of the Covid-19 Black Swan."
As gold prices crashed on Monday, giant gold-backed ETF the SPDR Gold Trust (NYSEArca: GLD) saw investors liquidate stock back to the fund's smallest size in nearly 2 months.
Cheaper competitor the iShares Gold Trust (NYSEArca: IAU) in contrast expanded again, growing to a new record size.
The giant iShares Silver Trurst (NYSEArca: SLV) also grew quickly as investors bought the stock, surging towards the record size of mid-August 2020.
"The trigger for a reversal of gold's medium-term bull market," agrees Rhona O'Connell at brokerage StoneX, was always "likely to be the establishment, validation and distribution of a reliable vaccine."
Following that "knee-jerk reaction to the Pfizer announcement," says O'Connell, and "with the vaccine still in test...today has seen a rather more sober assessment. The euphoria has worn off, with the markets regaining some  balance and the Dollar stabilising after its 0.8% gain yesterday."
Shanghai gold prices caught up with yesterday's drop on Tuesday but fell less steeply, pulling the cost of bullion landed in China – the metal's No.1 consumer market – within $20  per ounce of London quotes.
The narrowest discount since early July, that suggests growing demand after the Covid Crisis erased and then reversed the typical Shanghai premium over London, offering an average $9 per ounce incentive to new imports before January 2020.