END_OF_DOCUMENT_TOKEN_TO_BE_REPLACED

GOLD TRADING in London's wholesale bullion market saw prices stay above $1870 per ounce on Thursday, holding a gain of 1.7% for the week so far as world stock markets, commodities and cryptocurrencies rallied from yesterday's steep losses.
Major government bond prices also clipped their losses, edging longer-term interest rates back down after the release of notes from the Federal Reserve's April meeting showed policymakers agreeing that the jobless rate is elevated and inflation expectations remain "well anchored", meaning there is no need to begin signalling any rise in interest rates or slowdown of QE asset purchases at present.
"Gold is clearly benefiting from a wave of re-balancing," says the precious metals team at French bank and London bullion market maker BNP Paribas, "out of alternative assets and into the safer bounds of a traditional yet well understood asset.
"Inflation figures across developed markets are also helping improve the short-term sentiment towards gold whereas global equities are in the red."
But yesterday's jump in gold prices actually saw quiet trading in physical bullion, with London's benchmark auctions finding lower-than-average interest while the world's largest gold-backed EFT saw net investor outflows.
The LBMA Gold Price's morning auction needed just 1 round to find its clearing price of $1860, with volume 12% below last month's average.
The PM auction also then needed just 1 round, with volume over 36% below April's average at a price of $1888.45 per ounce – the highest afternoon fixing since 7th January.
The giant SPDR Gold Trust (NYSEArca: GLD) meantime shrank by 0.5% with its first day of net liquidation in 4 sessions taking its holdings back down to 1,031 tonnes – a 12-month low when reached in early April.
Trading in gold-price derivatives leapt in contrast, with the number of Comex gold futures contracts jumping 50% from its previous 5-day average to the highest daily total since 8th January's 3% price plunge according to data from the CME exchange.
Options trading jumped 3 times faster, up 153% from the prior 5-day average in betting on the size of gold-price moves to the most since the last day of February. 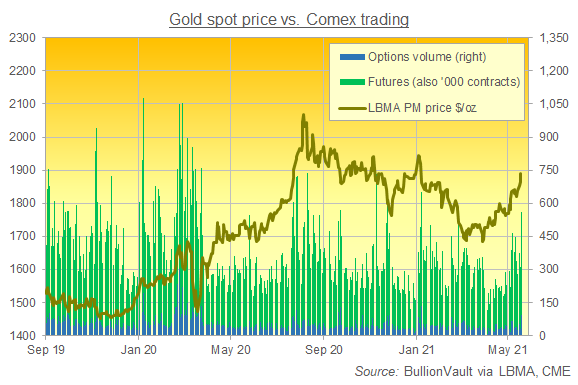 Wednesday was "a real rollercoaster of a day for gold and silver," says the trading desk at Swiss refining and finance group MKS Pamp, "surging late in the European session as equities and crypto currencies tanked, only to reverse the gains when rhetoric regarding tapering of bond purchases hit the [news] wires."
So-called cryptocurrency Bitcoin today rallied more than $10,000 from yesterday's lows to trade back above $41,000 after erasing almost all of 2021's previous 140% gain.
Dogecoin meantime rallied 10% after losing two-thirds of its Dollar value since Tesla boss Elon Musk's much-anticipated but "awkward" promotion of the joke token on popular US entertainment show SNL less than a fortnight ago.
Following Tuesday's order from Beijing that China's banks and payments systems are now banned from providing any services to the sector, the province of Inner Mongolia – home to perhaps 8% of global crypto-mining, powered by the region's heavy use of cheap but highly-polluting coal-fired electricity plants – today said it is launching a telephone hotline for people to report suspected crypto-miners.
"A move past $1900 is en route," reckons BNP's team, "[which] would erase all of the year-to-date losses and would likely attract some self-fulfilling buy momentum.
"It's going to be an interesting month of June."