END_OF_DOCUMENT_TOKEN_TO_BE_REPLACED

GOLD PRICES struggled to rally from yesterday's steep drop across all financial assets in London trade Wednesday, regaining only $10 of Tuesday's $25 plunge to new 2-month lows as the Dollar rose further on the FX market amid fresh calls for tighter US Fed policy ahead.
Western stock markets bounced from their worst day since January as the "new commodity super-cycle" took a pause but record-high European energy prices and the UK's gasoline supply-crunch  continued to make headlines while  China imposed rolling black-outs on industrial users in Shanghai and Beijing due to this year's 30% hike in coal prices curbing power output.
Silver prices also struggled with gold, dropping back to $22.17 after bouncing 40 cents from yesterday's re-touch of Friday's new 2021 low at $22.11 per ounce.
That kept the Gold/Silver Ratio – a simple measure of the two formerly monetary metals' relative pricing – near 11-month highs above 78. 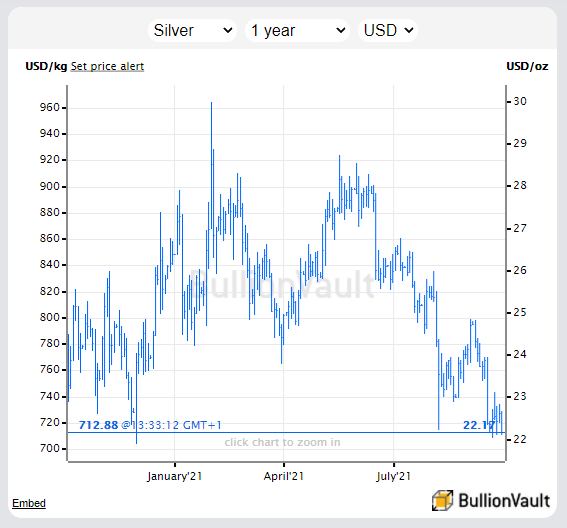 Global stock markets closed last night at their lowest since 20 July on the MSCI World Index, down 4.3% from early September's fresh all-time high.
The MSCI has fallen on 12 of 20 trading days so far this month.
That contrasts with setting 7 fresh all-time record highs in August's 22 sessions.
Asian stock markets fell hard on Wednesday, following Wall Street's slump with a 2.1% drop in Japan's Nikkei index.
European equities bounced however, pulling the EuroStoxx 600 index 0.9% higher to reverse almost half of yesterday's drop.
Government bond prices also rallied, pulling longer-term interest rates lower with Germany's 10-year Bund yield falling back to minus 0.22%, down 5 basis points from yesterday's 3-month high, as 16-year Chancellor Angela Merkel's CDU party continued trying to build a new coalition after the weekend's inconclusive federal elections.
UK borrowing costs retreated to 0.97% per annum on 10-year Gilts after breaking through 1% for the first time since March 2020's Covid Crash chaos.
Ten-year US Treasury yields meantime slipped back to 1.51% after ending last night at 1.54%, the highest rate since mid-June.
"Inflation is going to stay above target over the forecast horizon. That is a good thing," says US central bank member James Bullard of the St.Louis Fed – a voting member in 2022.
"[But] there is now a risk we are going to overachieve and be too high for too long," and so along with 2 rate hikes next year, Bullard thinks the Fed should start shrinking its balancesheet – now swollen to more than $8.4 trillion by quantitative easing, twice its pre-Covid size – "at the end of the taper" now set to start reducing new monthly QE from the current $120bn before the end of 2021.
"There is very little bullish case for gold right now," Reuters quotes OCBC Bank economist Howie Lee in Singapore.
"We see gold prices at around $1500 by the end-2022, especially with tapering having completed its course by then and the Fed looking to start raising its interest rates."
The global rise in bond yields is "a bit of a conundrum" said Bank of Ireland and European Central Bank policymaker Gabriel Makhlouf to Bloomberg News earlier, "because we're seeing labor markets slack but we're also seeing supply blockages.
"Inflation is [being] driven by transitory factors, but...we need to be vigilant...We need to be ready to respond."
For gold prices, and "Set against rising interest rates and a strengthening US Dollar, we don't see inflation as strong enough to outweigh policy developments," says a note from US investment bank Morgan Stanley, forecasting a 2022 average of $1621 per ounce.
"We see lower prices ahead."
Corporate bond prices also rallied Wednesday, with the iShares iBoxx High Yield ETF (NYSEArca: HYG) rallying from a 1-month low in pre-market New York trade as yields on triple-A as well as 'junk rated' debt eased back from Tuesday's spike.